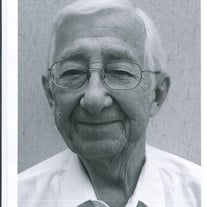 Richard James Less, 96, of Toledo, Ohio, left to be with the Lord on February 14, 2020. Dick was born in Toledo, Ohio on July 4, 1923 to Celia Sobecki Less and Clement F. Less. Dick attended Central Catholic High School and Dayton University prior to serving in the U.S. Army from 1943 to 1946. He survived combat at the Battle of the Bulge and multiple other battles. After the war, he completed his education at the University of Toledo earning a degree in Mechanical Engineering. On May 26, 1951, he married his beloved, Ann Theresa Dickinson, enjoying over 68 years of marriage. Dick worked at Stanley Carter Co., at which time he moved his young family to Roswell, NM to work on the Atlas underground missile sites from 1960-62. After returning to Toledo, he worked with his dad and together they formed Clem Less, Inc. Mechanical Contractors, serving as president of the company between 1967 and 1986. He continued to work as a consultant until 2000. Dick was a founding member of St. Joan of Arc Catholic Church and a member of their first parish council. He was also an officer and president of St. Pat’s Over 55 Club, a member of the Knights of Columbus, the American Legion and the Maumee Elks Lodge. Richard is survived by his wife, Ann Less, sister Charlotte Troike, and children Michael Less (Joane) of Plain City, OH; Barbara Gunning (William) of Whitehouse, OH; James Less (Jeanne) of Cape Coral, FL; and Robert Less (Deb) of Whitehouse, OH. Dick has ten grandchildren: Stephanie (Michael) Carlin, William (Suzanne) and Charles Gunning; Beth Ann, Keith (Deb), Kelly and Jason Less; Celia (Dan) Wilkens, Allison (Kyle) Walker, and Jennifer (Rob) Beatty. He has nine great grandchildren. Richard is predeceased by his mother, father and brother in law, Roc Troike. Visitation will be at the Coyle Funeral Home, 1770 S. Reynolds, Toledo, OH 43614 on Sunday, February 16 from 3:00- 6:00 p.m. with the Rosary recited at 5:30 p.m. The Funeral will begin at 10:00 a.m. at Coyle, followed by Mass on Monday, February 17 at 10:30 am, at St. Joan of Arc Catholic Church followed by interment at Resurrection Cemetery. In lieu of flowers, the family suggests a donation to St. Vincent DePaul Society-St. Joan of Arc at 5856 Heatherdowns Blvd, Toledo, OH 43614 or Central City Ministry of Toledo at 1933 Spielbusch Ave., Toledo, OH 43604. Please leave a condolence message at CoyleFuneralHome.com.