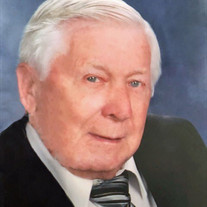 Richard Anthony Janicki On Friday December 7, 2018 Richard “Dick” A. Janicki passed away peacefully in Toledo at home surrounded by loving family. Richard was born the last of six children (Tony, Florence, Walter ”PG”, Virginia and Helen) to Agnes (Ledzienowski) and Anthony Janicki, polish immigrants and proprieters of the “A. Janicki Grocer’s” on Detroit and Vance St. serving the Kusvanz community. Richard attended St. Anthony Elementary School, Libbey High School and University of Toledo College of Engineering. He served two years in the Army and was a Korean War Veteran. He met the love of his life, Evelyn (Magdus) Janicki, and during their sixty years together had three children Julie, Rick and John. He began his construction company “Janicki and Sons’” long before the birth of his sons. During its’ over fifty year tenure the name evolved to “Able Concrete and Builders” and continues to be operated by his son John. Building, family and friends were Richard’s passions. “I’ve never worked a day in my life,” he often said because he enjoyed every aspect of business and building. Not only did he construct numerous commercial buildings, he also built several family homes including the “cottage” in MI and “Up North”, a Clam River cabin where he had campfires, hunting, great steaks and endless card games with family. He was the most gregarious man, he was always ready with a joke. His many passions included golf, a member at the Highland Meadows Golf Club for 34 years; Brandywine Golf club member for 3 years, A Charter Member of the Toledo Ski Club helping to build the lodge; Elks Card Group Thursdays; Breakfast Club since 1976; Monday night Meeting too many years to count; Member of Toastmasters International, Shriners and Masons for years, an avid Bowler at the Glass Bowl and University Lanes for 30 years; travelled to Europe for skiing and Hawaii with many golf trips in between. He is preceded in death by his wife Evelyn (Magdus) Janicki and son Rick Janicki. He is survived by daughter, Julie Vess, son John (Kim); nieces Susan Delbert, Diane Gilligan, Marcia Janicki and Chris Amborski; nephews Tony Delbert and best friend Frank Justen; grandchildren, Johnny (Ashley), Ryan (Nicole), Jessica (Mike) Vaculik, Ricklee (Paxton), Danielle (Charle) Hymore, Jason “Moe” and Alexandra Vess, great grandchildren Brianna, Brennan, Tyler, Mason, Alyssa, Reagan, Ashlyn and a grandson on the way. Visitation will be at the Coyle Funeral Home 1770 S. Reynolds Rd. Toledo, Tuesday December 11, 2018 from 2 to 8 p.m. with a Scripture Service at 7. The funeral will begin at Coyle at 9:30, followed by the Funeral Mass Wednesday, December 12, at 10 a.m., St Joan of Arc Church 5856 Heatherdowns Boulevard with a luncheon to follow. The final resting place Ottawa Hills Memorial Park 4210 Central Ave. Toledo, Ohio will be at a later date. In lieu of flowers send memorial donations to the Shriner Childrens’ Hospital or the American Cancer Society. Please leave a condolence message and view Richard’s Memorial Video Tribute at CoyleFuneralHome.com.

The family of Richard Anthony Janicki created this Life Tributes page to make it easy to share your memories.

Send flowers to the Janicki family.