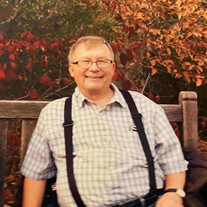 Richard Allan Beck of Bowling Green, Ohio, went to be with Jesus on October 14, 2021. Richard was born on April 29, 1950 to Allan and Shirley (Klewer) Beck in Toledo, Ohio. Richard married his high school sweetheart Jean Reinbolt on May 1, 1971. Together they celebrated their 50th wedding anniversary this year. They were blessed with three children and five grandchildren. Richard requested that he be remembered as "a working man." When he was going to school Richard held many jobs. He was a paper boy for the Toledo Blade, worked in produce at Joseph's grocery store, and as a sales clerk for Sears. After graduation from Whitmer High School in 1970, he worked in the trust department at Toledo Trust. In 1973, Richard went to school to become a journey man in Tool and Die Making. He started his career at City Machine and Tool, went on to work for Haughton Elevator, and retired from Ford Motor Company in Monroe, Michigan. After retirement he spent his time enjoying his family especially his grandchildren. He also enjoyed riding his tractor "Big Blue" on the six acres he shared with his wife in Bowling Green, Ohio. One of Richard's favorite hobbies was woodworking. He repaired and made all kinds of furniture. Richard also enjoyed photography and videography. He loved traveling and camping with his family. In the winter he enjoyed going to Florida with his wife and in-laws. His happiest moments were when he married Jean and when each of his children and grandchildren were born. Richard will be greatly missed by his wife: Jean (Reinbolt) Beck, his children: John (Denise) Beck, Susan (Chad) Ingram, Andrew Beck, his grandson Chad Ingram II, and granddaughters Chloe Ingram, Zoey and Sophie Beck, Grace Beck. Along with many family and friends. Friends may visit at the Coyle Funeral Home, 1770 S. Reynolds Rd., on Tuesday, October 19th from 10:00 a.m. until the time of the Funeral Service at 12:00 p.m. Interment will be private. Special thanks to the staff at Ohio Living Home Health and Hospice. In particular Jennifer who took amazing care of Richard through out his journey with cancer and Pastor Tim for sharing his faith with Richard. Memorial contributions may be made to Ohio Living Home Health and Hospice, 1730 South Reynolds Road, Toledo, Ohio 43614, , who assisted in his care. Please view and sign our online "guest registry" at CoyleFuneralHome.com

Richard Allan Beck of Bowling Green, Ohio, went to be with Jesus on October 14, 2021. Richard was born on April 29, 1950 to Allan and Shirley (Klewer) Beck in Toledo, Ohio. Richard married his high school sweetheart Jean Reinbolt on May... View Obituary & Service Information

The family of Richard Beck created this Life Tributes page to make it easy to share your memories.

Richard Allan Beck of Bowling Green, Ohio, went to be with Jesus...

Send flowers to the Beck family.