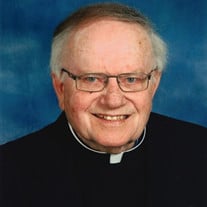 Reverend Raymond C. Sheperd, 87, a retired (Senior Status) priest of the Diocese of Toledo, died on Saturday, December 21, 2019 in Lucas County, Ohio. Born on January 14, 1932, he was the son of Grover and Ethel (Atkins) Sheperd. Ray grew up in the Old West End of Toledo, with his family belonging to Rosary Cathedral Parish. After graduating from Central Catholic High School in 1949, he began his formation for the priesthood, attending Saint Meinrad Seminary, Indiana, and Mount St. Mary’s Seminary, Cincinnati. He was ordained a priest by Bishop George J. Rehring on May 25, 1957 at Rosary Cathedral. In addition to his seminary studies Father Ray was also able do graduate studies at Xavier University, Cincinnati, Laval University in Quebec City, and he earned a Master of Arts Degree from the University of Notre Dame. In 1971. Having been a priest for over 62 years, Father Ray served in a variety of pastoral assignments throughout the Toledo Diocese. He served as an Associate Pastor at Saint Joseph Parish, Fremont, Saint Clement Parish, Toledo, and Saint Rose Parish, Perrysburg. His first pastorate was at Saint Joseph Parish, Blakeslee and Sacred Heart Parish, Montpelier. From 1972 to 1979 he was the Pastor of Saint Thomas Aquinas Parish, Toledo, which was followed by his serving as Pastor of Saint Wendelin Parish, Fostoria from 1979 to 1989. In 1989 he began his service for the Diocese as Vicar for Priests, and he took on the additional role of Vicar for Deacons in 1992. Father Ray was granted Senior Status (retired) in the year 2000, but he continued to be very active as a priest, helping at local parishes and Queen of Peace Chapel at Lourdes University up until the day of his death. Fr. Ray was blessed to have many friends. He enjoyed life and had diverse interests. He loved Shakespeare and the symphony, choral singing, playing cards (especially bridge), and, most of all, his beloved cottage, boat, and fishing with his friends. His siblings, brothers Joseph and Robert, and sister Janet Moylan, have all pre-deceased him. He is survived by his sisters in law Elizabeth Eberly and Eiko Sheperd; nieces and nephews: Patricia Wicks (Christopher), Joseph Sheperd, Daniel Sheperd (Darlene), Carolyn Burns (Francis), Robert Sheperd (Maria), Charles Sheperd, Mary Justin Hayes (Harvey), Rosemary Krill (Joe), Kenneth Sheperd (Angie), Grover Sheperd , Jim (Maritza) Moylan, John (Peggy) Moylan, Bill (Sue) Moylan, Tom (Jill) Moylan, and numerous great nieces, nephews, and great -great nieces and nephews. The funeral arrangements are as follows: Visitation will be held at Saint Ignatius Church, 212 North Stadium Road, Oregon, Ohio on Sunday, December 29, 2019, with Reception of the Body at 2:00 pm and visitation continuing until 6:00 pm (Evening Prayer at 5:30 pm). The Funeral Mass will be on Monday, December 30, 2019 at 11:00 am at Saint Ignatius Church. There will be visitation Monday morning beginning at 9:00 am until the time of the Funeral Mass. Burial will be at Saint Ignatius Cemetery, Oregon. Memorial gifts may be made to: The Priest Retirement Fund of the Diocese of Toledo, The Seminarian Fund of the Diocese of Toledo, or Saint Ignatius Church, Oregon, Ohio.

The family of Raymond C Sheperd created this Life Tributes page to make it easy to share your memories.

Send flowers to the Sheperd family.