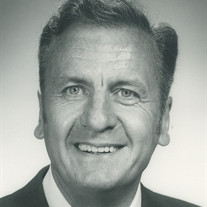 After 98 years of lighting up every room he walked into on December 17, 2021, Ray B. Kay went to be with his bride of 67 years, Marie, who he spent the past 8 years eagerly waiting to see. He has left all of us with joyful memories we will cherish forever. Ray was a proud, outgoing and energetic gentleman, who never met a stranger. Every person to him was just a friend he hadn't met yet. He loved his wife and family with every single ounce of his being, and was loved beyond measure in return. Born in Chicago, Illinois on June 25th, 1923, Ray attended St. Ignatius High School and Illinois Institute of Technology. He was always active in sports, particularly track in high school. Later Ray took up bowling and what soon became his favorite, the game of golf, which he played through age 95. During WWll, Ray served with the 5th Army in England for 3 ½ years. Following his military service he worked with International Harvester in Chicago and Toledo until 1949 and then quickly found a passion for car sales. Through the 1950's he worked with Bob Reese Ford and was the General Sales Manager at Leiphart Lincoln Mercury. He then began his 50 year career with the Schmidt organization. Ray joined the Schmidt family in 1960 as a General Sales Manager and later part owner of University Pontiac in Bowling Green, Ohio. In 1975 he joined the management team of Ed Schmidt Pontiac in Perrysburg and served as General Manager for over 2 decades. During his many years with Ed Schmidt, Ray contributed substantially to the success of the dealership, served as a leader and example for new salesmen and built lasting relationships throughout the community. Undoubtedly, Ray's biggest blessing in life was meeting and marrying the love of his life, Marie. Together they built a life that garnered constant admiration from their family and for which we are forever grateful. Traveling was a favorite pastime and together they visited many beautiful places, Aruba, Hawaii, England, and perhaps one of his most memorable trips was playing a round of golf at the Old Course at St. Andrews in Scotland with his son-in-law , Joe. Left to cherish his memory are his biggest fans, daughters Janis Kay, and Susan (Joe) Vetter; grandchildren, Aly Sterling, Andrea Szenderski, Margot (Brian) Borger, Clay (Johanna) Vetter, Liz (James) Gorzynski; great- grandchildren, Madeline, Amelia and Gabrielle Sterling, Isabelle and Jillian Szenderski, Charlotte, Norah and Fritz Borger, and Rayland Sorrell Vetter. We would like to thank the wonderful staff at Kingston Perrysburg's Memory Care for the loving care they provided Ray. As much as they claimed he brought them joy, he adored the love and affection they provided for him as well. Friends may visit at the Coyle Funeral Home, 1770 S. Reynolds Rd. on Wednesday, December 22 from 11:00 a.m.-1:00 p.m. A Mass of Christian Burial will follow, at 1:30 p.m. at Our Lady of Lourdes Church. Interment will be at Resurrection cemetery, with military honors. Continuing his golfing legacy, memorial contributions may be made to First Tee-Lake Erie. Please raise a toast (preferably a margarita) to the one and only, Ray Kay, a life extremely well lived. Please leave a condolence message and view Ray's memorial video tribute at CoyleFuneralHome.com.

After 98 years of lighting up every room he walked into on December 17, 2021, Ray B. Kay went to be with his bride of 67 years, Marie, who he spent the past 8 years eagerly waiting to see. He has left all of us with joyful memories we will cherish... View Obituary & Service Information

The family of Ray B. Kay created this Life Tributes page to make it easy to share your memories.

After 98 years of lighting up every room he walked into on December...

Send flowers to the Kay family.