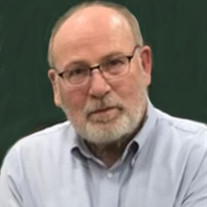 Randall E. Bohland, age 73 of Perrysburg, OH, passed away peacefully on February 26, 2022 while surrounded by his family. He was born to Thomas and Imelda (Tiller) Bohland on December 20, 1948. He was a graduate of Rogers High School in 1966 and Bluffton College where he received his Bachelor's Degree. He served his country proudly in the U.S. Air Force during the Vietnam War. Randy married the love of his life, Jean Emlinger, on July 18, 1970 and together they raised 2 children. He spent his career as a Director of I. T. at Excell Home Fashions until the time of his retirement. He was an off ice official for the Toledo Walleye, a member of the Knights of Columbus #11370 and St. Joseph Church in Maumee. Randy enjoyed watching football and hockey, especially the Boston Bruins. Most of all, he loved spending time with his grandchildren. Randy was preceded in death by his parents and sister, Donna Whalen. He is survived by his loving wife, Jean; daughter, Michelle (Steve) House; son, Bill (Michelle) Bohland; grandchildren, Susan, Julia, Maggie, Megan and Ethan; brothers, Ron and Russ (Cathi) Bohland and sisters, Ardell Van Mason and Pat Mahaney, as well as many nieces and nephews. Friends may visit at the Coyle Funeral Home, 1770 S. Reynolds Rd., on Thursday, March 3rd from 3:00-7:00 p.m. where the Knights of Columbus will recite a Rosary at 7:00 p.m. Funeral services will be held on Friday, March 4th beginning at 10:00 a.m., in the mortuary, followed by a Funeral Mass at St. Joseph Church (Maumee) at 10:30 a.m. Interment Resurrection Cemetery. Memorials may take the form of contributions to the Michael J. Fox Foundation. Please view and sign our online "guest registry" at CoyleFuneralHome.com

Randall E. Bohland, age 73 of Perrysburg, OH, passed away peacefully on February 26, 2022 while surrounded by his family. He was born to Thomas and Imelda (Tiller) Bohland on December 20, 1948. He was a graduate of Rogers High School in 1966... View Obituary & Service Information

The family of Randall E. Bohland created this Life Tributes page to make it easy to share your memories.

Send flowers to the Bohland family.