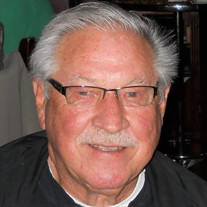 Ralph Paul Gerig, 83 years of Holland, Ohio, took his final dispatch call on October 19, 2017 at UTMC after a brief illness. He was born on December 24, 1933 to Ralph and Garnet Gerig in Fort Wayne Indiana. As most everyone knows, Paul was a professional truck driver his entire life. He began as a teenager driving a milk route in Milan Township, Indiana. At the age of 37, Paul received an award for one million miles of accident free driving and that trend continued as he completed an estimated five million miles more. Paul was a dedicated family man. He truly enjoyed his time spent with kids, grandkids, brothers and cousins. He rarely missed a grandson’s baseball game, soccer game or band concert. Paul loved to play cards, he enjoyed a good joke, loved sports but most of all he loved a good party. Paul was a dedicated Indians and Pistons Fan! In retirement, he cherished his winter trips to Florida. Paul was preceded in death by his parents; sister Mary Garmater; brother Bob Gerig .He is survived by his loving wife Arlene; daughters Michele (Kevin) Werling of Broken Arrow, OK and Yvonne Bynum of Fort Wayne, IN; son Tracy (Becky) Stutz of Swanton, Ohio, and his brother Tom of New Haven, IN. His wonderful voice and his great laugh will be truly missed by his grandkids, Heath, Caleb, Maria, Lane, Paige, Jacob and Jordan as well as many nieces and nephews. Friends may visit at the Coyle Funeral Home, 1770 S Reynolds Rd; on Monday October 23, 2017 from 4-8 pm. Funeral services will be held on Tuesday October 24, in the mortuary at 11:00 am where the family will greet guests starting at 10:00 am. Interment services will be held in the near future in Scipio Cemetery, Harlan, Indiana. Memorial contributions may take the form of a donation to either the Toledo Christian Schools or the charity of the donor’s choice. Please view and sign the on-line guest registry at CoyleFuneralHome.com.

Ralph Paul Gerig, 83 years of Holland, Ohio, took his final dispatch call on October 19, 2017 at UTMC after a brief illness. He was born on December 24, 1933 to Ralph and Garnet Gerig in Fort Wayne Indiana. As most everyone knows, Paul was... View Obituary & Service Information

The family of Ralph Paul Gerig created this Life Tributes page to make it easy to share your memories.

Send flowers to the Gerig family.