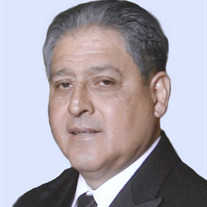 Pete Sifuentes, age 77 of Whitehouse, OH, passed away on December 7, 2020, in his home. He was born to Francisco and Josefa (Garcia) Sifuentes on July 10, 1943. He was a graduate of Macomber High School in 1961 and then Pete served his country proudly in the U.S. Marine Corp. He married the love of his life, Karen Endricks, in May 1968 and together they raised 2 children. Pete started his career working for the Ford Motor Company until he was hired as a Police Officer for the Toledo Police Department. Pete's brothers from the Toledo Police department fondly referred to him as "Jesse." After his retirement, he worked security for the Lucas County Courthouse, Whitmer High School and then the Maumee Municipal Courthouse. He was a member of the TPPA, American Legion Post #384 in Whitehouse, the Fraternal Order of Eagles and the Elks in Maumee, the Latino's Club and the Moose in Sylvania. Pete loved fishing, boating, basketball and especially the Ohio State Buckeyes. He also enjoyed golfing which he only took up to spend time with his brother, Ray. He was preceded in death by his parents and brothers, Ray and Frank Sifuentes. He is survived by his loving wife, Karen; daughter, Staci (Leo) Espino; son, Scott (Lacey) Sifuentes; grandchildren, Trae, Andrella, Leo III, Santos and Alessandro; brothers, Jose (Martha) and Mike Sifuentes; sister-in-law, Debi (Ray) Sifuentes as well as many other extended family members and friends. The family would like to extend a special thank you to the EMT Units that responded and the Lucas County Sheriff's Department for their compassionate care, especially, Sheriff John Tharp. A Memorial graveside service will be held on July 10, 11:00 a.m. at Restlawn Memorial Cemetery, 3665 Genoa Rd. Perrysburg, OH 43551 with Military Honors. Donations may be given to St. Jude Children's Hospital. Please leave a condolence message at CoyleFuneralHome.com

Pete Sifuentes, age 77 of Whitehouse, OH, passed away on December 7, 2020, in his home. He was born to Francisco and Josefa (Garcia) Sifuentes on July 10, 1943. He was a graduate of Macomber High School in 1961 and then Pete served his country... View Obituary & Service Information

The family of Pete Sifuentes created this Life Tributes page to make it easy to share your memories.

Pete Sifuentes, age 77 of Whitehouse, OH, passed away on December...

Send flowers to the Sifuentes family.