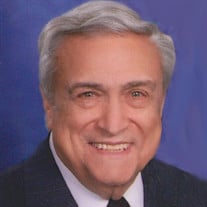 Paul Vincent Palmisano, age 89 of Holland, OH, passed away on March 3, 2021.He was born to Frank and Christine (Dattilo) Palmisano on May 31, 1931. He was a graduate of Purcell High School and went on to proudly serve his country in the U.S. Army. Paul also graduated from Xavier University in Cincinnati, OH where he received his Bachelor's Degree and later his Master's Degree from Bowling Green State University in Business Administration Management. Paul spent the majority of his career working for the Sisters of Charity, mainly Mercy Hospitals, St. Joseph Hospital in Denver and later retired from St. Vincent Mercy Medical Center Human Resource Director. He also taught English to Foreign Jesuit Students at the Sacred Heart Seminary. He was a member of St. Patrick of Heatherdowns Church where he was a Lector, Eucharistic Minister, Choir, CRHP and served on the Parish Council. Paul was a 4th Degree member of the St. Patrick of Heatherdowns Knights of Columbus Council #14155 and a 4th Degree member of the Bishop Hoffman 807 Assembly, serving in various official positions in Cincinnati, Denver and most recently Toledo. He spent many years in community theaters, wherever he lived, (starting in high school) acting, directing and served on different boards, most recently with our local, The Village Players. A few of his favorites include: The Music Man, South Pacific, The King and I, Kismet, How to succeed in Business….and The Most Happy Fella. He also worked with Rod Serling, then a writer of WLW-TV in Cincinnati and starred in a PBS Children's Hour, working opposite Kaye Ballard, who played his wife. Even in the Army, he in was assigned with troop entertainment. Besides all his volunteering, he also enjoyed traveling and working puzzles Paul was preceded in death by his 1st wife, Antionette Palmisano; infant daughter, Madonna Palmisano; his parents; brother, Frankie Palmisano; sister, Rosemarie Miglio and step-son, Robert Kellerbauer, JR. He is survived by his 2nd wife, Anna Jean Kellerbauer-Hildebrand Palmisano; children, Pamela (George) Pascoe, Gregory (Maria) Palmisano, Melanie (Craig) Sorensen and Angelina (Adam) Keefe; step-son, Shawn Kellerbauer; 6 grandchildren; 3 step-grandchildren and 5 great-grandchildren. Friends may visit at the Coyle Funeral Home, 1770 S. Reynolds Rd., on Wednesday, March 10th from 2:00-8:00 p.m. where a Scripture Service will be recited at 7:00 p.m. Funeral services will be held on Thursday, March 11th beginning at 9:30 a.m., in the mortuary, followed by a Funeral Mass at St. Patrick of Heatherdowns Church at 10:00 a.m. Interment Resurrection Cemetery. If you wish to attend the Funeral Mass via Live Stream go to YouTube and click on "Toledo St. Pats YouTube" channel. Face masks and social distancing will be required by the funeral home and the church. Memorials may take the form of contributions to St. Patrick of Heatherdowns Church or to Hospice of Northwest Ohio.

Paul Vincent Palmisano, age 89 of Holland, OH, passed away on March 3, 2021.He was born to Frank and Christine (Dattilo) Palmisano on May 31, 1931. He was a graduate of Purcell High School and went on to proudly serve his country in the U.S.... View Obituary & Service Information

The family of Paul Vincent Palmisano created this Life Tributes page to make it easy to share your memories.

Paul Vincent Palmisano, age 89 of Holland, OH, passed away on...

Send flowers to the Palmisano family.