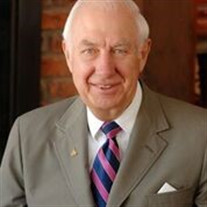 Paul Martin Kraus, 85, a respected Toledo attorney since 1958, died of heart failure on June 24. He was a family man above all, and died at home, surrounded by his wife, children, and grandchildren, overlooking the lake he loved. Paul was the son of Clement John Kraus and Gertrude Mertes Kraus. He was born in Toledo and educated at Gesu and Central Catholic, where he was a member of the golf team, marching band and a CYO athlete. His parents proudly sent him to the University of Notre Dame, where he earned degrees in accounting (1954) and law (1957). The young Double-Domer met his wife of 58 years, Carol Anderson, in 1959. They were engaged within four months of meeting and married in 1960. Paul, whose younger brother Bernard died in childbirth, was raised as an only child, but soon found himself a part of the large and growing Anderson family. He and Carol raised eight children together, and have 30 grandchildren. He began his legal career at Cubbon & Rice in 1958. He joined Marshall, Melhorn, Bloch & Belt in 1962 and spent the rest of his career there. Despite “retiring” in 2012, Paul continued to go to the office, often for pro bono work, until very recently. Paul lived by the adage, “To whom much is given, much is expected.” He was industrious and generous with his time. He was a member of the U.S. Army Reserve from 1957-1963. He was active in the Toledo community. A devoted Catholic, he was a parishioner at Gesu from 1932-1979. He was a founding member of St. Joan of Arc Parish in 1978 and belonged there until his death. He was a regular lector and Eucharistic minister until his declining health prevented it. In the 1970’s he was appointed by Bishop John Donovan as the Diocesan-wide chairman of the Diocesan Development Fund (DDF), predecessor of the Annual Catholic Appeal. He was also active with CYO, coaching numerous boys’ and girls’ basketball teams. He and Carol sent their children to Catholic schools all over Toledo, and he remained supportive of Catholic education. He could be found in the basketball stands at St. John’s long after his boys we’re playing. He was a longtime member of the board at The Andersons, as well as the Downtown Toledo Exchange Club. He was active in the Notre Dame Club of Toledo as a past president, director, 1986 Man of the Year, and longtime chairman of Alumni Schools Committee. Paul was an athlete who enjoyed golf, bowling, and playing basketball in his younger days. He was an accomplished squash player at the YMCA and The Toledo Club, where was a member for much of his adult life. He was also an avid fisherman; his time on the water was reflective of his love of nature, his patience, and his appreciation for quiet. He also loved to work in his yard, and was found weeding on his knees long after it was safe for him to do so. He loved the Farm and the lake, and often said, “Why would a fella want to be anywhere else?”. He is survived by his wife, Carol Anderson Kraus, and his eight children, their spouses, and 30 grandchildren: John & Ana (Arcocha), Kelly, Kevin, Daniel, Emily; Joe & Marie (Vedra), Kate, Elizabeth, Frances; Gretchen & Chuck Hartlage, Molly, Claire, Cecilia, Joan; Sue & Chris Dziubek, Maggie, Ellen, Jacob, Caroline; Tom & Paula (Koshiol), Ginny, Grace, Eli, Mary Jo; Francie & Mike Larkin, Ryan, Jack, Nora, Meg; Phil & Jennie (Hergenrather), Olivia, Noah, Josh; Eric & Jenny (Hills), Mary Carol, Anderson, William, Paxton. He is also survived by his in-laws, Dick, Fran, Mary Pat, and Una Anderson, as well as numerous nieces and nephews who love their “Uncle P-Haul”. He will be missed by many people he included in his family, most notably Sue Pitcher, Ken Phillips, and an international exchange-student daughter and three sons. Paul “Papa” Kraus will be long-remembered by his family and friends for his humility, his counsel, his wit and loving silliness, and his beautiful marriage with Carol. He was a man of his word, a man who never stopped learning, and a man who taught by example. He will be remembered above all for his daily-expressed gratitude. He loved to grill and look out at a favorite tree, and it was there that a prayer/mantra was born; in more recent days and years, he said it aloud more and more often: “Thank you, thank you, thank you.” Visitation will be held from 2-8 p.m. on Wednesday, June 27 at Coyle Funeral Home, 1770 S. Reynolds Rd, Toledo. The last hour will include an open opportunity for memory sharing. Visitation will continue at St. Joan of Arc Church, 5856 Heatherdowns Blvd., Toledo, on Thursday, June 28 at 9:30AM, with a funeral service to follow at 10:30; cemetery services will be private. In lieu of flowers, donations can be made to Hospice of Northwest Ohio or Catholic Charities, Diocese of Toledo.

Paul Martin Kraus, 85, a respected Toledo attorney since 1958, died of heart failure on June 24. He was a family man above all, and died at home, surrounded by his wife, children, and grandchildren, overlooking the lake he loved. Paul was... View Obituary & Service Information

The family of Paul Martin Kraus created this Life Tributes page to make it easy to share your memories.

Send flowers to the Kraus family.