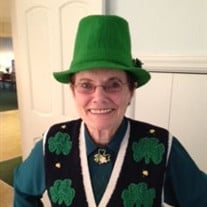 Patricia A. Byrne Patty Byrne departed this world at the age of 92 on Friday, July 20, 2018, to celebrate with St. Patrick for all eternity. Born March 20, 1926 in Toledo, Patty was the firstborn daughter of John F. and Jessie A. (McCann) Byrne. After graduating from Notre Dame Academy in 1944, she proudly served on its Advisory Council and was inducted into the NDA Hall of Fame in 2002. It was also in 1944 that Patty began her 40-year career in customer service and as an executive secretary at Owens-Corning Fiberglas. There she was active in the Fiberglas Club, serving as chairwoman for many Club activities, writer for the Fiberglances newsletter, and president of the Ladies Golf League before retiring from the company in 1984. Not inclined to slow her characteristically brisk pace, Patty quickly established herself as one of the more outgoing members of the Owens-Corning Fiberglas Retirees’ 201 Club, and shortly thereafter was elected its first female president for multiple terms. An avid golfer and strong advocate of women’s causes, Patty advanced both of these interests as a volunteer for many years at the Jamie Farr LPGA Classic at the Inverness Club. She was also an accomplished amateur figure skater from an early age and well into her professional years, giving her poise and stamina that served her especially well on the courts of the Laurel Hill Tennis Club, a weekly destination for decades in midlife. Patty was also a lifelong devotee of the arts and philanthropic causes. She was active in the Mercy Auxiliary, served as social chairwoman for the Toledo Opera Guild, and worshipped at Gesu Catholic Church, where she was a member of the 50-Plus Club and the Resurrection Choir and funeral lunch program. Famously proud of her Irish heritage, Patty considered it her privilege and responsibility to honor St. Patrick, especially on his Feast Day, March 17 — as demonstrated by the green carpet with which she decorated the area from the elevators to her office at work every year, accompanied, of course, by green donuts and Irish music. After her retirement she continued the tradition with her annual St. Patrick’s Day Open House at her home on Evergreen Drive in Ottawa Hills, as reported by the Blade’s social column on several occasions. Patty was preceded in death by her beloved sister, Jeanne M. Westrick of Allison Park, PA, and is survived by her devoted nephews, Richard “Charlie” Westrick of Allison Park, PA, and Jeffrey “Andy” Westrick of Sewickley, PA. Friends may visit on Tuesday, July 24 at Gesu Catholic Church from 9:00 a.m. until the beginning of Mass at 11:00 a.m. Burial will be at Calvary Cemetery. Coyle

Patricia A. Byrne Patty Byrne departed this world at the age of 92 on Friday, July 20, 2018, to celebrate with St. Patrick for all eternity. Born March 20, 1926 in Toledo, Patty was the firstborn daughter of John F. and Jessie A. (McCann)... View Obituary & Service Information

The family of Patricia Ann Byrne created this Life Tributes page to make it easy to share your memories.

Patricia A. Byrne
Patty Byrne departed this world at the age...

Send flowers to the Byrne family.