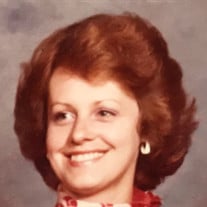 Pamela Jean Stiles, 78, went home to Jesus on Friday, February 26, 2021. Pam was born in 1942 to the late Dorsey and Dolores (McFeater) Berkebile. Self-sacrificing. A caring, loving, gentle soul with deep faith, Pam's greatest joy in life was spending time with her friends and family, particularly her grandchildren. She very much enjoyed gardening, painting, and her pets (countless times adopting stray dogs and cats). Pam attended Waite High School in Toledo. Fiercely independent and enjoying the people she would meet, Pam chose a career in retail. Her first job was with Tiedkes, Toledo's once legendary upscale multiple variety store. Later in life after raising her children, Pam returned to retail working in several stores at the Southwyck Mall and Franklin Park over the years. She even had the opportunity to use her talent to produce paintings of comic strip characters that were sold at the malls. Her last position was with Lowes Home Improvement in Perrysburg, where she truly enjoyed working in the garden department. After Pam's husband was drafted into the Army and stationed in France, Pam enjoyed an adventure she would often recall. She made her trip to France on the beautiful cruise ship the RMS Queen Elizabeth, one of the last voyages the QE would make. Pam lived in a residence off post and from there she enjoyed trips to the beautiful countryside of Switzerland and France, traveling throughout the small mountain winery towns and to the wonderful city of Paris. After Europe, Pam returned to Toledo and raised her family. Later, she would live in Bowling Green and Perrysburg making many friends wherever she went. Pam is survived by her three children, Kevin Stiles of Haskins, Carey Stiles of Milan, and Amy Stiles of Toledo. Pam leaves behind eight grandchildren - Charles, Alex, Madeline, Mallory, Jordin, Melissa, Faith, Dylan, Nicholas, six great grandchildren, and former husband Frank Stiles. Family and friends may visit the Coyle Funeral Home, 1770 S. Reynolds Rd. in Toledo, on Sunday, March 21, 2021, from 3:00-6:00 p.m. Pam will be laid to rest at Lake Township Cemetery in Millbury, OH near her parents in a private service. In lieu of flowers, those wishing to contribute to Pam's memory may do so to the Toledo Humane Society 827 Illinois Avenue Maumee, Ohio 43537. Condolences may be shared online at www.coylefuneralhome.com

The family of Pamela Jean Stiles created this Life Tributes page to make it easy to share your memories.

Send flowers to the Stiles family.