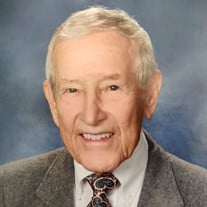 Norman F. Heydinger died May 4, 2019 at The University of Toledo Medical Center. He was born to Edward and Gertrude Heydinger on January 7, 1921 in Toledo. He graduated from Waite High School and Miami University and in 1954 earned his MBA from The University of Toledo. While at Miami, he earned a Private Pilot’s License in the Civilian Pilot Training Program and was a member of Beta Theta Pi Fraternity. In 1942 he entered the Coast Guard Academy, New London, Connecticut and was commissioned with the rank of Ensign. After special training at The Ohio State University,he served for a year-and-a-half in the South Pacific on a Navy AKA assault ship participating in seven invasions, and on a Coast Guard Patrol Frigate. He was honorably discharged in 1946 with the rank of Lieutenant. After the war, he was employed in marketing research at Libbey Owens Ford, Toledo; Seiberling Rubber Company, Akron; LOF Glass Fibers, Toledo; PPG Fiber Glass, Pittsburgh;and Rogers National Research, Toledo. In 1964 he envisioned, researched, promoted, built and served as President and General Manager of Laurel Hill Swim and Tennis Club, Toledo, for 20 years with the support and dedication of his wife, Dorothy. He sold the Club in 1985 and retired. In 1985, Laurel Hill was awarded National Tennis Club of the Year by the United States Tennis Association. In his business career he served as a founder and Northwest Ohio President of the American Marketing Association and National President of the Swim Facility Operators Association of America. He was a long-time member of Rockwell Springs Trout Club, Castalia, and Our Lady of Perpetual Help Church, Toledo. He was predeceased by his parents, his sister, Rose (Clair) Gladieux, and his brother, Edward (Jane). He is survived by his wife of 68 years, Dorothy. Survivors also include children Mary (David) Sims, Millbury; Diane (Eric) Landers, Columbus; Marsha (Mark) Strominger, Cincinnati; and Peter (Virginia Keil), Holland. Also surviving are grandchildren Monica (Kyle) Leppelmeier, David Sims (Jennifer), Christopher Landers, Andrew Landers, Kristen (Colin) Harper, Julie Strominger, Derek Strominger, Sarah (John) Novak and Alison (Dan) Goble; and great grandchildren Addyson, Connor, and Annalee Leppelmeier. Friends may visit at Coyle Funeral Home, 1770 S. Reynolds Rd., from 2:00 – 7:00 PM on Wednesday, May 8. The funeral will begin in the mortuary at 9:30, with the Mass of Christian Burial celebrated at 10:00 AM on Thursday, May 9 at Our Lady of Perpetual Help Church. Interment and military honors will be at Resurrection Cemetery. Memorials may be made to Our Lady of Perpetual Help Church or Hospice of Northwest Ohio. Please leave a condolence message at CoyleFuneralHome.com.

Norman F. Heydinger died May 4, 2019 at The University of Toledo Medical Center. He was born to Edward and Gertrude Heydinger on January 7, 1921 in Toledo. He graduated from Waite High School and Miami University and in 1954 earned his MBA from... View Obituary & Service Information

The family of Norman Francis Heydinger created this Life Tributes page to make it easy to share your memories.

Send flowers to the Heydinger family.