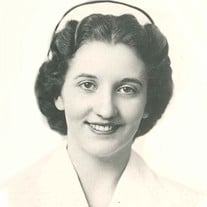 Naomi Ruth Conger, 86, passed away on May 10, 2018 at St. Luke’s Hospital. She will be deeply missed this Mother’s Day. She was born on August 9, 1931 in Toledo, Ohio to Newell and Margery (Bibler) Lake. Naomi graduated from Scott High School in 1949, where she was a proud member of the award winning Bulldog band and quartet, playing the saxophone. Naomi graduated from Toledo Hospital School of nursing in 1953. She dedicated her professional nursing career to caring for others for 35 years. Naomi’s character was shaped by compassion, concern and giving. She was an active volunteer for the American Red Cross and was involved in many social organizations. Among them were the Toledo Chapter of the Order of the Eastern Star #341, the Toledo Swiss Singers, many German clubs such as the GBU and GAF, and Faith Lutheran Church. She enjoyed singing, baking for the GBU, reading and traveling in her retirement years. She was a nurturing, loving mother to her son Craig, and the over 20 foreign exchange students that stayed with her and her late husband Eugene. Left to cherish her memory is her son Craig (Suzan) Conger, her sister Eunice Meier, her nephews Ricky, Randy, Jimmy and niece, Wendy Lake; and her foreign exchange student “son” of 36 years Dr. Klaus Pabst. Naomi was preceded in death by her parents, her husband of 63 years, C. Eugene Conger, and her 2 brothers Bill and Jim Lake. Friends may visit at the Coyle Funeral Home, 1770 S. Reynolds Rd. on Tuesday, May 15 from 2-8 p.m. Toledo Swiss Singers will perform at 6:30. The funeral will be held at Coyle on Wednesday, May 16 at 10:00 a.m. with a special service from the Order of the Eastern Star. Burial will be at Ottawa Hills Memorial Park. Memorial donations may be given to the Susan G. Komen Breast Cancer Foundation. Please leave a condolence message for the family at CoyleFuneralHome.com.

The family of Naomi Ruth Conger created this Life Tributes page to make it easy to share your memories.

Send flowers to the Conger family.