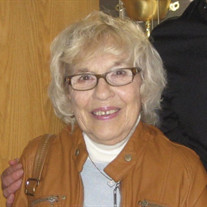 Monica Julia Ammons passed away peacefully at home in the early morning hours of September 5, 2019. She was born Monica Donofrio on April 17, 1942 in Toledo, Ohio, the second child of John and Virginia (Stephan) Donofrio. Monie, as she was affectionately known to her adoring husband of 38 years, Joe Bartholomy, and her many close friends, was known as the rebel of the family. She was a tiny petite woman who sat on a phone book to see over the steering wheel to drive and had blocks taped to the pedals, but there was nothing tiny about her personality. Her sister Joanne, 10 years her senior, drove her and her group of friends all over during high school and had trouble keeping track of her. All of her life, Monie loved to buck the system. She was into women’s lib before it was popular and always had a sign in her kitchen that said, “A woman’s place is in the house…and the Senate.” She was a free spirit with a stubborn streak and she was never ever guided by the opinions of others. She was accepting of everyone, but if someone didn’t return acceptance to her, she simply moved on. Monie was known for many things. In the mid-1950s, she was featured in a Blade article because her household had the first non-party line telephone in this area. She worked with and assisted the woman who started the first Head Start Program in Toledo and then finished her degree at the University of Toledo, achieving a BA in Teaching. She raised five children mainly on her own. But she is probably most recognized in the Toledo area for running the Central Avenue John H. Vance Interiors store for many years, managing it and doing decorating for John Vance as well. Monie was known for one more thing: her love for animals, miniature poodles in particular. She always had a house full of them, and leaves behind now to mourn her: Peaches, Tinker Bell, Naddy, Tutu, Misty, and especially Stormy, who would rather sit with her mom than get a treat. Monie’s loved ones include her loving husband, Joe Bartholomy, whom she married in Las Vegas on April 7, 1981, and who survives her. She leaves behind her children: Carey (Sami) Ammons, Kelly (Nick) DeMarco, Stacey Maurer, Stephanie Ammons, and Michael (Tarja) Ammons. Monie had 8 extremely accomplished and talented grandchildren, and she loved attending their sporting events, dance recitals, and other milestone celebrations: Geno, Nicholas, Kristina, and Julia DeMarco, Troy and Jay Maurer, and Christian and Mia Ammons. She is also survived by her sister, Joanne (Donofrio) Vick, brother, John Donofrio, and nieces Janine Vick-Movish and Joan Vick. Monie’s best friend for 45 years, Dyan Osborn, also survives. Monica was preceded in death by her parents, her brother-in-law Jim Vick, and her niece Janice Vick. A celebration of Monica’s life will occur in November, details to be arranged. Please consider any memorial contributions in memory of Monica to be given to the Toledo Humane Society. Coyle Funeral Home is caring for the family.

Monica Julia Ammons passed away peacefully at home in the early morning hours of September 5, 2019. She was born Monica Donofrio on April 17, 1942 in Toledo, Ohio, the second child of John and Virginia (Stephan) Donofrio. Monie, as she was... View Obituary & Service Information

The family of Monica Julia Ammons created this Life Tributes page to make it easy to share your memories.

Monica Julia Ammons passed away peacefully at home in the early...

Send flowers to the Ammons family.