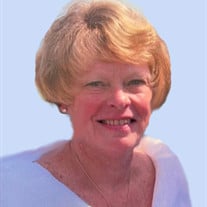 Michele L. Jackson (Shelley), of Portage, Michigan and originally from Toledo, Ohio, died peacefully February 26, 2022 from complications of Acute Leukemia at Ebeid Hospice with her daughter by her side. After a beautiful week of countless "goodbyes" and "thank yous" exchanged both ways, she was finally ready to let go and soar. Shelley was born on December 10, 1946 in Toledo to Annette Persons Smith and Lester Smith. After graduating from Bowser in 1964, Shelley attended the University of Toledo where she ultimately received her Masters Degree in Spanish. While at Toledo, she pledged Pi Beta Phi and spent many years after that assisting in recruiting and supporting the Chapter. On June 5, 1976, she married Dick Jackson and they were married 42 years prior to his death in 2018. The union produced one child: Meghan (Jason) Nagy and two grandsons: Evan and Zach. They were a great source of joy to Shelley. Shelley's long career as an educator included teaching at Mary Manse College, 38 years with Children's Discovery Center, and 40 years at St. John's Jesuit High School. She also participated in Continuing Education classes in Portage and created a budding group of Spanish speakers who still remain close. While she thoroughly loved all her work, there was an undeniable connection she had with SJJ, where she proudly mentored "her Boys" through tutoring with a perfect combination of high expectations and loads of encouragement. While they may have grumbled from time to time, her results spoke for themselves, and many students credit her for "getting them through school." She was instrumental in starting A+ and loved those coworkers. Her final days were a testimony to the influence she had on so many students and parents as many of them, both former and current, stopped by to express their love and gratitude to her. Boys- the feeling was mutual! In response to Dick's sudden death, Shelley proudly created The Richard and Shelley Jackson Scholarship Fund at SJJ. Outside of teaching, Shelley had a robust social life, including her affiliation with PEO Chapters T and Q in Toledo and Kalamazoo. Shelley loved traveling and if it wasn't to their annual destination of Cancun, you would find both Shelley and Dick with Jeannie and Tom Coulter at Suttons Bay, or at Hilfinger's Sunset Cabin on Wolf Lake, or socializing with her dear Portage group that she adored, often times by the pool. Wherever it was, you could always expect Shelley to show up with some Chardonnay, snacks and her signature laugh. (We all just heard that in our heads didn't we?) Her love of Loma Linda margaritas may only have been surpassed by her love for jewelry! The nighttime crew knew her standing order and many of us joined her there along with her (now) 100 year-old mother Sweetie on more than one occasion! And last but certainly not least: Shelley adored ALL things University of Michigan, right down to her vanity plates! She especially celebrated the outcome of the last football contest, and enjoyed irritating her Buckeye friends with her "Hail to the Victors" ring on her phone. Go Blue! Shelley is preceded in death by her husband, Dick and father, Les. She is survived by her mother, Annette; brother, Richard; daughter, Meghan (Jason) Nagy and her grandsons, Evan and Zach. Also surviving are her sister-in-law, Judy Barber, many Barber family nieces and nephews, Karen and Don Jackson, her cousins, Susan (Thomas) Schlageter and family, Richard (Kate) Elwell and many Elwell cousins, her adopted Hilfinger family siblings and their offspring and her beloved Shih Tzu Mila, who will now be lovingly cared for by the Kraemer family and will no longer be carted around like a princess in a baby stroller! Her life-long friends, the Bassett sisters, will carry on Shelley's memory through their many shared experiences. Always willing to open her home and her heart, she will be missed by adopted children and grandchildren Tim Kynard (and grandbaby Ava), Lizzie O'Brien, The Karl Aschemeier family and the OG: Gary Stewart. These names only scratch the surface of all the lives she impacted through her mentoring, loyalty, dedication and love so please know, that if not specifically named, you were a valued member of Shelley's village and we love you for that. No tribute to Shelley would be complete without acknowledging the man, the myth, the legend: Dr. Rex Mowat. There was not a conversation had with Shelley that his name didn't come up. When he was not out hanging the moon for Shelley, she credited him for giving her the years that she did have after her initial AML diagnosis and was profoundly grateful for the love and support that both he and his wife Linda provided these last several years. The family would like to extend a special thank you to the two Sara(h)s- Sara Jackson and Sarah Aschemeier-for their devoted attention to Shelley in her final days. We were all inspired by their love and actions. Kudos to the hospice staff who had a keen understanding of what we were going through and assisted in untold ways to help Shelley transition peacefully as well. A Memorial Mass will be held on Friday, March 18, 2022 at St. Patrick of Heatherdowns Church, 4201 Heatherdowns Blvd., Toledo, OH 43614, at 11:00 a.m. where Shelley's family will begin receiving guests at 10:00 a.m. Interment will be private. Those wishing to make a contribution in lieu of flowers are asked to consider the Richard and Shelley Jackson Scholarship Fund at St. John's or to Ebeid Hospice. Shelley's devotion to her friends and family, her love and enthusiasm for work and play and her engaging and commanding (and if we're being honest, sometimes demanding!) personality and all the other special qualities were a wonderful gift to all who knew her and she will be sorely missed! Please view and sign our online "guest registry" at CoyleFuneralHome.com

Michele L. Jackson (Shelley), of Portage, Michigan and originally from Toledo, Ohio, died peacefully February 26, 2022 from complications of Acute Leukemia at Ebeid Hospice with her daughter by her side. After a beautiful week of countless... View Obituary & Service Information

The family of Michele L Jackson created this Life Tributes page to make it easy to share your memories.

Send flowers to the Jackson family.