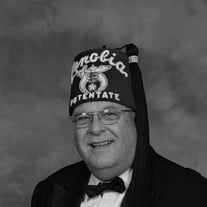 Michael E. Schnapp, 75, died peacefully on May 31, 2017 at Flower Hospital. Born August 8, 1941, the eldest of three boys born to Helen M. (Papenfuse) and Bernard R. Schnapp, Mike attended the south-end St. James grade school. He attended the Pontifical College Josephinum in Worthington, Ohio as a freshman, but enrolled as a sophomore at Central Catholic, from which he graduated in 1959. He enjoyed being a manager of the football team. He was included in the induction of the Central Catholic Hall of Fame with the 1959 18-0 basketball team. He engaged in most sports . . . never scored a touchdown, never hit a home run and no one can attest to his ever scoring a basket (free throw, maybe). He bowled for thirty years, never had a 300 (280) or a 700 (680). He loved scouting, Troop #127 (Ad Altari Dei). Mike worked at Tiedtke’s and Owens Corning before beginning a printing apprenticeship at the Toledo Blade, where he was employed for 38 years. He was a member of Toledo Typographical Union #63 and a member of The Toledo Newspaper Guild. For several years, he was correspondent to the Toledo Union Journal as the writer for Local #63’s ‘PiLines’ column. He also served for a short time as the editor of the Elk’s ‘Eleventh Hour News”. He married the former Ruth Schlachter in 1962, resulting in four children, Jeffrey (Barb), Jennifer Schnapp-Jacobs (Jeff), Jerry (Lisa) and Jon. Their relationships resulted in twelve grandchildren; Rebecca, Heather, Allison and Zachary; Justin and Joel; Seancy, Marissa, Skylar, Bailey and Brandon; and Mackenzie. The marriage ended in 1982. Mike married Susan Mierzwiak in 1987. The couple traveled extensively with Shriners groups, and independently to Hawaii, Rome, Barcelona, Nice, and Venice. He became a Master Mason in 1979 and a Zenobia Shriner in 1985. After an eleven-year stint as the editor of Zenobia’s newspaper, The Hadji, becoming Editor Emeritus, and serving the Shrine in many offices, he became Zenobia Potentate (president) in 2007. He was a member of Damascus-Collingwood Lodge #643 F&AM, an honorary member of Rubicon Lodge #237. Mike was a member of Zenobia’s Director’s Staff (past president), Findlay Clowns, Cabiri #8, Wood County Shrine Club (past president), Hillbillies, Fucowee Tribe, Pharaohs. He was an honorary member of the Legion of Honor, the Evzones, Highlanders and Temple Guards. He was a member of Ancient Accepted Scottish Rite, Valley of Toledo; Fort Miami/Calumet Chapter #191; Toledo Council # 33, R. & S. M.; and a member of Toledo Commandery No. 7, Knights Templar. He was a member of The Royal Order of Jesters and a Kachina. He belonged to Toledo Elks Lodge #53, and was a member of The National Order of Turtles, Pond #1. He was a supporter and former Board Member of the Browning Masonic Community. He was an ESGR (DoD) volunteer. Mike had been perceived as the first ‘Honor Flight’ instigator. Returning home from a 2004 dinner meeting in Findlay, he told his wife, Susan, he was uncomfortable about a conversation he had had with friend, Glen Robinson, a 94-year old veteran, who expressed doubt that he would ever see the WWII Memorial. Susan encouraged him to take action, whereupon he enlisted the financial support of the Findlay Shrine groups and Zenobia’s Legion of Honor (veterans group). He bought airline tickets and arranged a Washington escort through Congress’ Marcy Kaptur’s office. He enlisted fellow Findlay Shrine Club member, Richard Kelley, to accompany Glen. The flight departed from Toledo, August 18, 2004 with a Ms. Kaptur sendoff. Honor Flight Northwest Ohio began flights in April of 2008. In 2001, he established, in conjunction with the Shriner’s Burns Awareness Week, a night to honor local firemen. In 2003, Zenobia president, the late Dr. Patrick Pope, requested Dr. Jerry Argabrite to carry on the program to become a Firefighter’s Awards Night, which featured the giving of awards for heroism, innovation and longevity. Those awards were presented by local television celebrities, Toledo mayors and State Rep. Teresa Fedor. He was a strong supporter of most Central Catholic athletics, especially his “grandsons”, the Irish Wrestling Team. Mike was preceded in death by his parents, brother, Ronald B., and nephew, Cletus. Mike is survived by his beloved wife, Susan. Also surviving are his children, twelve grandchildren, and ten great-grandchildren; brother, Steven L., sister-in-law, Michelle, and former wife, Ruth (Schlachter). Also, Godchildren, Michelle Heskett, Cheryl Kamencka, Frank M. Incorvaia, Richard Schnapp, and Jay Mierzwiak. Friends may visit at the Coyle Funeral Home, 1770 S. Reynolds Road on Sunday, June 4 from 2-8 p.m. with at Masonic Service at 7. The funeral service will begin in the mortuary on Monday, June 5 at 9:30 a.m. with the funeral mass to begin at 10:00 at St. Joan of Arc Catholic Church. Burial will be at Resurrection Cemetery. The family would like to extend a heartfelt thank you to the wonderful nurses, doctors, medical assistants, and dietician for their knowledge, kindness, and compassion as we navigated through these past two years. Tributes may be made in the form of donations to Cincinnati Shriner’s Burns Hospital or to the Shriner’s Red Sneaker Fund for burns research. Please leave a condolence message for the family at CoyleFuneralHome.com. -30-

The family of Michael Edward Schnapp created this Life Tributes page to make it easy to share your memories.

Send flowers to the Schnapp family.