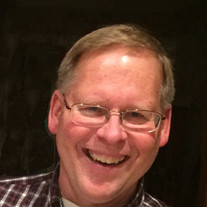 Michael Wayne Johnson, 63, passed away on Friday, April 3, 2020 surrounded by his loving family, after his battle with the COVID-19 virus. Mike was a very patient, kindhearted man and his family meant the world to him. He was born on August 2, 1956 to Glenn and Rosa Lee (Brauneck) Johnson and grew up in Monclova, OH. After earning his bachelor's degree from the University of Toledo, Mike worked 15 years for Finkbeiner, Pettis and Strout and mostly recently worked 16 years for the City of Perrysburg in the Engineering Division. On June 2, 1984 he married the love of his life Sheri (Schrader) Johnson. Together they had nearly 36 years of fantastic memories and raised two wonderful daughters of whom he was extremely proud. His daughters were his world and he was always by their side through their many successes. From camping trips, to family cookouts, and Disney vacations, Mike could always be seen with a smile on his face when he was with his family. Mike looked forward to their annual Caribbean vacation that he and Sheri took with their good friends. Some of the happiest times Mike had over the past several years were spent being an amazing Bumpa to his three grandchildren, never missing their activities. From soccer games, to dance recitals and ice skating lessons, Bumpa was always there to cheer them on. Mike is survived by his endless love, Sheri and his daughters Amanda (Todd) Karazim and Alyse (Charles Wineland), as well as his three grandchildren that were the light of his life: Brady, Kenzley, and Jackson Karazim. Mike is also survived by his father, Glenn Johnson, brothers Gary Johnson and Phil (Jennifer) Johnson and mother-in-law, Loretta Schrader. He is preceded in death by his mother, Rosa Lee Johnson and father-in-law, Dick Schrader. Due to the current circumstances, we are unable to give Mike the proper last respects he so well deserves. Mike will be laid to rest at Toledo Memorial Park. A celebration of life will be held at a later date. Memorial contributions can be made to Immaculate Conception Church (434 Western Avenue, Toledo) or Ronald McDonald House (3883 Monroe Street, Toledo). Please view and sign the guest registry at coylefuneralhome.com.

Michael Wayne Johnson, 63, passed away on Friday, April 3, 2020 surrounded by his loving family, after his battle with the COVID-19 virus. Mike was a very patient, kindhearted man and his family meant the world to him. He was born on August... View Obituary & Service Information

The family of Michael Johnson created this Life Tributes page to make it easy to share your memories.

Send flowers to the Johnson family.