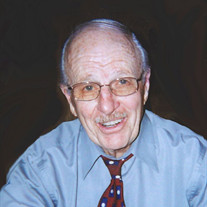 Michael James D'Arcangelo, loving husband and father of four was born in Toledo, Ohio to Michael and Anna (DiLanciano) on July 25, 1932. Michael passed away peacefully at Hospice of Northwest Ohio on December 23, 2021. Michael married Jane J (Bochenek) and they were married 63 wonderful years. Along with his wife Jane; Michael's survivors include his sister Virginia Knapp; and children, Joe (Julia) D'Arcangelo, Toni D'Arcangelo, Julie (John) Husk, and Brad (Dana) D'Arcangelo. In addition, he is survived by 14 grandchildren, and 8 great-grandchildren. He was preceded in death by his parents, and brother Claude "Mike" D'Arcangelo. Michael attended Central Catholic High School. He earned his undergrad degree from the University of Toledo and served as President of the Theta Chi fraternity. He continued his education at the University of Toledo, earning his Juris Doctorate in 1963. He was a Korean War Veteran and proud to have served his country in the United States Air Force. Michael was a devout Catholic and served as parish Council President at St. Joseph of Sylvania and was a loyal and active member of OLPH for more than 40 years. Michael and his family began sailing in 1981 and he has been a member of North Cape Yacht Club for over 40 years. He was honored to serve as Commodore of North Cape Yacht Club in 1999. He was a Mills Master, sailing over 25 races in the TYC Mills Trophy Race on Lake Erie on his beloved sailboat Consigliere. In 2012, his last Mills Race, he took First in Class. He started his career at Cubbon and Rice. He was a founding partner of Kroncke, D'Arcangelo, Sutter, Furey and Mills. He was a distinguished attorney and a member of the Toledo Bar Association and the Ohio State Bar Association for almost 60 years. Michael was lovingly known as Papa to his family. He enjoyed everything Italian, never met a dessert he did not like, loved red wine and danced to Frank Sinatra with his wife Jane. The family will be receiving guests at the Coyle Funeral Home, 1770 S. Reynolds Rd., on Tuesday December 28th from 3:00-7:00 p.m. where a Rosary will be recited at 7:00 p.m. Funeral services will be held on Wednesday, December 29th beginning at 9:15 a.m., in the mortuary, followed by a Funeral Mass at Our Lady of Perpetual Help Church at 10:00 a.m. Interment Calvary Cemetery. In lieu of flowers, the family recommends donations in memory of Michael to Our Lady of Perpetual Help Church, Hospice of Northwest Ohio, or the North Cape Sailing School. Please view and sign our online "guest registry" at CoyleFuneralHome.com

The family of Michael James D'Arcangelo created this Life Tributes page to make it easy to share your memories.

Send flowers to the D'Arcangelo family.