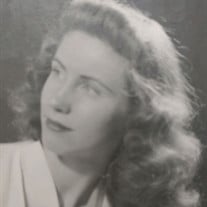 Mary Charlotte “Polly” Rossi, 95, passed away peacefully at home on June 1, 2020 with family by her side. She was born on June 9, 1924 in Hamburg, MI to George and Ella (Navarre) Moon. She graduated from Ann Arbor High School and later met her husband, Robert A. Rossi at the University of Michigan. They were happily married for 66 years, until his death in 2016. Polly enjoyed sewing, golfing in her leagues and traveling. She and Robert went on several cruises, and enjoyed their second home on Hilton Head Island. Polly was a devoted mother and grandmother. She was an avid University of Michigan football fan, and a longtime season ticket holder. She loved having the family over on holidays where she did all the cooking, and especially enjoyed Christmas. She loved taking her grandkids on vacation to Hilton head and Disney land, was a big supporter of the boys and girls club she enjoyed dining out at mostly local restaurants such as Eddie lees, the former Avenue Bistro, and her favorite, Georgio’s. She is survived by her children Mary Jane (Jim) Walton, Brad (Wanda) Rossi, Scot (Karen Dunne) Rossi and Jill Bratton (Edward Smith); grandchildren, Lisa and David Stambaugh, Robert Andrew III, Adam and Colin Rossi, Nicholas and Julie Bratton. Her brother Edward “Corky” Moon and many nieces and nephews also survive. Polly was preceded in death by her parents, her husband Robert A. Rossi, her son Robert A. Rossi Jr. and brothers John, Robert and Donald Moon. Visitation will be held at St. Joan of Arc Church on Wednesday June 10, from 10:00 am until the time of the Funeral Mass at noon. Burial will be at Resurrection Cemetery. Coyle Funeral Home is assisting the family with funeral arrangements. Memorials may be given to St. Joan of Arc Church. The family would like to thank Polly’s special care giver Danita Duncan “DD” for her love and support. Please view Polly’s video tribute and leave a condolence message for the family at CoyleFuneralHome.com.

The family of Mary Charlotte "Polly" Rossi created this Life Tributes page to make it easy to share your memories.

Send flowers to the Rossi family.