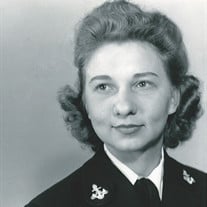 Martha Momenee, loving and devoted wife to her husband of 70 years, amazing mother of seven sons, U.S. World War II Navy veteran, passed away on September 17, 2018. M. Martha Momenee, née Maier, was born in Portsmouth, Ohio, on April 16, 1919, to William and Anna (Scheid) Maier. She was the youngest of six daughters, the mother of seven sons, and the grandmother of eleven grandchildren. After graduating from Holy Redeemer High School in Portsmouth, Martha worked as a switchboard operator in Cincinnati before enlisting in the women’s branch of the United States Naval Reserve during World War II as a WAVE (Women Appointed to Volunteer Emergency Service). She served at the Naval Air Station in Green Cove Springs, Florida, where she met a young yeoman named Thomas Momenee. They married three days after VE Day in the historic Cathedral Basilica of St. Augustine. In 1946 they moved to Tom’s hometown of Toledo and went on to have seven sons in the golden age of the fifties and sixties. Martha and Tom lived most of their life together at 215 Eastern Avenue in South Toledo, members of Immaculate Conception parish. They renewed their wedding vows on their 50th wedding anniversary with Father William McKeever, the priest who had originally married them in St. Augustine, Florida, in 1945. They celebrated their 70th wedding anniversary shortly before Tom’s death in 2015. A devoted wife and mother, with an ever-curious nature and fun-loving spirit, Martha passed away peacefully in her home, surrounded by her loving family. She was 99. She is survived by her seven sons, who will miss her dearly: Richard, Gary (Karen), James (Sara), Thomas (Anita), William (Erin), Mark (Pat), and Christopher (Jacqueline), and eleven grandchildren: Jimmy and Joey; Ethan and Taylor; Lauren, Rachel, Mara, Simon, (and preceded in death, Noah); Eric, Kelly, and Kyle. Gathering of family and friends begins at 9:30 a.m. on Saturday, September 22 at Our Lady of Perpetual Help Church, followed by a Mass of celebration at 10 a.m. Interment Resurrection Cemetery.Memorial contributions may be made to Ohio Living Hospice.

The family of Mary Martha Momenee created this Life Tributes page to make it easy to share your memories.

Martha Momenee, loving and devoted wife to her husband of 70...

Send flowers to the Momenee family.