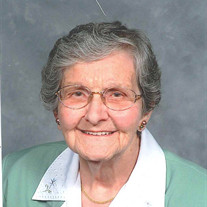 Mary H. Kohn, 99, passed away on Monday, August 28, 2017 in Doverwood Village, Hamilton, Ohio. She was born Mary D. Holcombe in Mt. Airy, N.J. on March 8, 1918. Mary graduated from Wilson College in 1939 and served in the USO during World War II where she met and married Arthur P. Kohn on July 7, 1946. She was a homemaker, Girl Scout leader, PTA President, Red Cross volunteer, Sunday School teacher, and Smart retirement and Lamplighter programs leader for A.A.L. In addition, Mary was a member of the L.W.M.L., Compass Club and Organ Club and was a member of Concordia Lutheran Church since 1952. She worked for Toledo Mental Health as well as the Toledo Y.W.C.A. for many years. Mary was honored as the National Volunteer of the Year representing the Aid Association for Lutherans at a ceremony with President Reagan in Washington D.C. in 1986. Mary was preceded in death by her husband Art in 2001. She is survived by daughters Sharon (Steve) Pruszynski of Summerfield, Florida, and Carol (Bill) Berning of Cincinnati, Ohio; grandchildren Keith (Michelle), Kevin (Missy), Eric (Michelle) Pruszynski, Tony (Amy) and Cindy Berning; great-grandchildren Ashley, Corey, Rebecca, Jacob, Emma, Molly, Elaina, Tanner, and Logan Pruszynski; Anderson and Axel Berning and Garrett and Cole Keneau. Funeral Services will be held on Saturday, September 2, 2017 at Concordia Lutheran Church, 3636 S. Detroit Avenue at 2 p.m. where the family will receive visitors beginning at 1 p.m. Interment Ottawa Hills Memorial Park. Memorials may take the form of contributions to the church or to a charity of the donor’s choice. Please view and sign the online guest registry at www.coylefuneralhome.com

The family of Mary H. Kohn created this Life Tributes page to make it easy to share your memories.

Send flowers to the Kohn family.