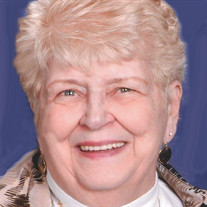 Mary Sue (Skeldon) Hare, wife, mother, sister, grandmother, great grandmother, and friend, passed away on July 16, 2017. Born to Frank Jr. and Catherine (Scanlon) Skeldon on May 1, 1940 in Toledo, Ohio. She graduated from Central Catholic High School in 1958. She married David Hare on April 20th, 1963 who preceded her in death in 2014. She worked as a homemaker for her five children. She served in many roles, active in the PTO to Little League concession stands, to Band Booster extraordinaire, and as a main cheerleader for all children and grandchildren. Once the children were grown, Mary Sue worked as a Customer Service representative for Tecumseh Box Company and as a secretary for Lucas County. Mary Sue is survived by her five children, Tricia of Toledo, Susan of Maple Heights, David Jr. of Romeo, MI, Molly of Terre Haute, IN, and Shelley (Larry) Johnson of Orrville. Surviving grandchildren include Kyle Fitch, Brandon Fitch, Matthew Fitch, David Hare III, Ashley Johnson, Cody Johnson and great grandchildren Brooklyn Fitch and Athena Fitch. Surviving siblings are Frank Skeldon, Kathy Woodward, and Therese Mitchell. In addition to her parents, Mary Sue was preceded in death by her sister Elizabeth Hipp. Friends may visit at the Coyle Funeral Home, 1770 S. Reynolds Road, on Wednesday, July 19, from 2-8 p.m. Funeral services will be held on Thursday, July 20, beginning at 9:15 a.m., in the mortuary, followed by a Funeral Mass at Our Lady of Perpetual Help Church at 10 am. Interment to follow at Resurrection Cemetery. Please view and sign her online “guest registry” at CoyleFuneralHome.com.

The family of Mary Sue Hare created this Life Tributes page to make it easy to share your memories.

Send flowers to the Hare family.