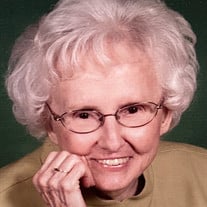 Mary Helena DuPraw, 101, of Toledo Ohio, formerly Royal Oak, MI, passed away peacefully in her sleep on Sept. 26, 2021 at Ohio Living, Swan Creek Retirement Village. Mary was born January 12, 1920 to parents Bessie and Frank Waterfall. She was raised by her mother in Flint, Michigan where she spent much of her youth reading, dancing, sewing, knitting and puppeteering. She graduated with honors from Flint Northern High School. She received a scholarship to college but was unable to attend due to a severe battle with pernicious anemia. She went on to work for Smith Bridgman's and Chevrolet. At the age of 24, Mary married Norman Young. As part of the Air Corps, Sergeant Young served in WWII until his plane was shot down and he was declared MIA. After healing her broken heart, she met and married Ashley DuPraw, a pilot who owned his own flight school and had trained cadets during WWII. They resided in Flint, MI where Ashley flew for GM out of Bishop Airport. They had two daughters, Shari (DuPraw) Navin and Kathi (DuPraw) Granzow. Ashley was transferred to the Detroit area and for the next 50 years they resided in Royal Oak, MI, raising their two girls, enjoying visits from their grandchildren and tending to their roses. Mary loved to garden. Mary was preceded in death by husband Norman Young, husband Ashley DuPraw, daughter Shari Navin and grandson Matthew Granzow. Although she had many tragic losses in her life, her faith remained ever strong and she devoted her life to the church and helping those in need. Mary is survived by daughter Kathi Granzow and son-in-law, Dennis Granzow of Toledo, two grandchildren, Jeffrey Granzow (Candice) of Santa Clarita, CA and Kathleen Peters (Steven) of Cincinnati, OH and two great grandchildren, Agnes Granzow and Blake Peters. A celebration of life will take place at Ohio Living @ Swan Creek 11:00 a.m., Saturday Oct. 2, 2021 in the chapel. The family will receive guests at 10 a.m. 5916 Cresthaven Lane. Toledo, OH 43614.

The family of Mary Helena DuPraw created this Life Tributes page to make it easy to share your memories.

Send flowers to the DuPraw family.