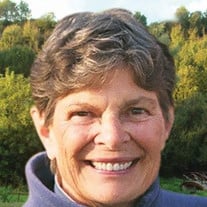 Mary Jo McCormick Anderson, age 86, died peacefully on November 8, 2017 in her home on Swan Creek in Toledo, Ohio, encircled by her grateful and loving family. Mary Jo was born the fifth of six children on March 13, 1931 to Dr. Edward James McCormick and Josephine Beck McCormick. She came into this world with eyes that found goodness and beauty in all that surrounded her–vision that remained steadfast throughout her life. Her family was foundational in forming the values and convictions that guided her. Mary Jo loved her siblings, Ed, Dick, Carol, Katie, and Mike, and their childhood homes on Parkwood Avenue and Sulphur Springs. She remained loyal to her family relationships, gathering them together for meals, conversation, laughter and support. She shared this love and grace with the many children of her siblings and eventually with her cherished extended Anderson family. Mary Jo had a lifelong zest for learning that, as a young adult, led her to the University of Michigan, where she earned a Bachelor of Education in 1952. Shortly after completing her degree, she boarded a ship bound for Europe and spent eight weeks with friends touring by bicycle. She taught fourth grade for two years, but her greatest contribution as a teacher was in her role as mother. She married Robert Anderson in 1954, and together they had eight children: Bob (Kim), Rick (Mary), Gerry (Lizann), Kevin (Claudia), Ruth (Jerry), Judy (Dean), Joan (Jim), and Christy (Abe). Mary Jo, or “Mumsy” as many of her kids affectionately called her, worked selflessly every day, with her husband Bob, to create a home that radiated love and hospitality. Over the years, many sought refuge, refreshment, and even took up residence in their home. Two people in particular, Andy Greco (Kathy) and César Garcia, came as guests one treasured Christmas in 1977 and became family. Holidays and family celebrations often centered around prayer and family Masses, celebrated in the living room by her beloved brother Dick, a Jesuit priest. As her children grew and the demands of motherhood evolved, Mary Jo entered graduate school and earned a Master of Counseling in 1987 from the University of Toledo. She worked as a counselor at Tennyson Center and taught at Lourdes College. She had an affinity for books and found peace in the melodies she played on her piano. Mary Jo also deeply valued community service, contributing significantly to the YMCA of Greater Toledo, St. Ursula Academy, St. John’s Jesuit High School, and The Servant Leadership Center. Mary Jo’s love burns brightly in the hearts of her 42 grandchildren, each of whom felt a deep sense of being loved and known by her. She welcomed her expanding family, and all its commotion, with open arms. She was the kind of grandma who was the first in the pool to play and was always up for any game. She could take a joke and dole one out, but she also knew when to give her undivided attention and listen from her heart. Recently she was blessed with three great grandchildren. Mary Jo’s life was guided by a deep faith she expressed through her love of and devotion to relationships. She was a loyal and committed wife, mother, grandmother, daughter, sister, aunt, and friend. She was a source of unconditional love for many who found their way to her for counsel and comfort. She reveled in the joy of others and compassionately accompanied people in their sorrow. Her love will live on for generations. Mary Jo is preceded in death by her husband, Robert James Anderson, Sr.; parents, Dr. Edward James McCormick and Josephine Beck McCormick; brothers, Edward McCormick, Jr. (Mary Jane), Richard McCormick, S.J., and Michael McCormick; sisters, Kathleen Brooks (Robert) and Carol Sala (William); and granddaughter, Rachel Christine Anderson. Visitation will be held at Coyle Funeral Home on Friday, November 10, from 2:00-8:00 p.m. A prayer service at Coyle will begin at 7:30pm. Mass of Christian Burial will be held at St. Joan of Arc Church on Saturday, November 11 at 10:00 a.m. Interment will be at Calvary Cemetery. The family requests that contributions made in honor of Mary Jo be given to St. Ursula Academy, Toledo GROWs, or one of two scholarship funds at St. John’s Jesuit High School: The Richard McCormick, S.J. Scholarship or The Dr. Edward J. McCormick Scholarship. Please view Mary Jo’s memorial video tribute and leave a condolence message at CoyleFuneralHome.com.

The family of Mary Jo Anderson created this Life Tributes page to make it easy to share your memories.

Send flowers to the Anderson family.