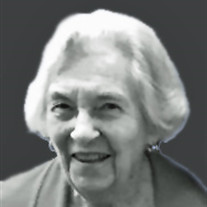 Marjorie M. Hutton, 94, passed away at home on Wednesday, June 16, 2021 after a short illness. She was the daughter of the late Thomas J. and Lillian Clark Mattimoe. A graduate of Notre Dame Academy and Marygrove College she received a master's degree in library science from the University of Michigan in 1949. That year she joined the Toledo Museum of Art where her mother had for many years taught Saturday art classes. Marjorie always appreciated her Museum library experience for the opportunity to serve the public, the staff, and University of Toledo students. At the Museum she met her husband, William Hutton, who served in various curatorial positions from 1952 to 1965 and again from 1971 until his retirement in 1992. At the time of her marriage in 1956, she was chairman of the museum division of Special Libraries Association. With their four children, Bill, Ruth, Mary and Eleanor (Nora), the Huttons moved to Manchester, NH in 1965 where William served as director of the Currier Gallery of Art. Marjorie headed many volunteers in organizing an elementary school library. She also served on the board of Manchester Institute of Arts and Sciences initiating a children's theater/film series. From 1968 to 1971 the Huttons lived in London while William worked at the Victoria and Albert Museum. On their return to Toledo, Marjorie became Upper School Librarian at Maumee Valley Country Day School. At MVCDS she enjoyed learning the role of media specialist in addition to traditional library work. As part of the school's Winterim program the indefatigable Marjorie led student tours to London and the U.S.S.R. After her retirement she accepted an offer to become a travel advisor, working ten years for Ottawa Hills Travel. Personally Marjorie enjoyed travel, with her art historian husband-he often remarking on her joie de vivre. After his death in 2000 family and friends were companions, particularly to Europe. Reading became her favorite activity, once saying she was reading all the books she had put on student lists but never had time to read herself. In addition to her busy professional activities, the ever-resourceful Marjorie kept an active home life with many guests subject to her cooking zeal. She was a former member of the Junior League of Toledo with volunteer service to Catholic Charities and The Toledo Symphony. She served many years on the Visiting Nurse Service board. Special interests were the Toledo Museum of Art, Toledo Symphony and The Historic Church of St. Patrick where she was a parishioner for many years. Marjorie moved to Ohio Living Swan Creek in 2016 where she served on several resident committees. Friends remember Marjorie as "an extraordinary person: funny, smart, brave, and a good, loyal friend." She is survived by her children, William (Gail) of Baltimore, Ruth K. Hutton of Amherst, MA, Dr. Mary (Peter) Burgi of Oak Park, IL, Eleanor (Nora) Hutton and her husband Kevin Radwanski; grandchildren missing their Gago are Gwen Arenberg and Frances Hutton, Sam and Philip Brainin, Julia, Paula, George and Max Burgi; great grandchildren Henry, William, and Caroline Arenberg. She is also survived by many nieces and nephews. In addition to her parents and husband, she was predeceased by her brothers, Thomas E. John G., and Rev. Edward (Ned) Mattimoe, S.J. Visitation will take place on Monday, June 21 at The Historic Church of St. Patrick, 130 Avondale Avenue, Toledo, Ohio 43604, from 10:00 a.m. - 11:00 a.m. followed by a Funeral Mass beginning at 11:00 a.m. Interment services will follow at Calvary Cemetery. Memorials may be made to the Toledo Museum of Art for the William Hutton endowed curatorship or the charity of the donor's choice.

Marjorie M. Hutton, 94, passed away at home on Wednesday, June 16, 2021 after a short illness. She was the daughter of the late Thomas J. and Lillian Clark Mattimoe. A graduate of Notre Dame Academy and Marygrove College she received a master's... View Obituary & Service Information

The family of Marjorie Hutton created this Life Tributes page to make it easy to share your memories.

Marjorie M. Hutton, 94, passed away at home on Wednesday, June...

Send flowers to the Hutton family.