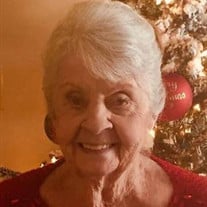 Marguerite (Peg) Mary Powers, 87, of Toledo passed away on Friday, November 30, 2018 at Hospice of Northwest Ohio. Peg was born in Warren, Ohio on March 16, 1931 to Mildred (Vahey) Dunn and James P. Dunn. She grew up in Niles, Ohio with her twin sister and two older brothers, graduating from Niles McKinley High School in 1950. Peg married her high school sweetheart, James Powers, on September 22, 1950. Before his death in 2011, they celebrated 60 years of marriage. Though they began raising their family of five children in their hometown of Niles, Jim’s career soon took them to Wilmington, Delaware, Hatboro, Pennsylvania, and, finally, Toledo, Ohio. In each town, Peg’s charm and sense of loyalty allowed her to form strong friendships with many wonderful people, and she made it a point to keep in touch with them throughout the years. Recently, Peg was asked, “What job did you do when you were younger?” She replied, “Five children!” This was her most cherished role. Even as adults, her children continued to flock around her, each living only a short distance from the family home. She was “Mom,” not only to her own children, but to their spouses and friends, as well. Her home and heart were always open. Her many nieces and nephews knew “Aunt Peg” as strong and kind, a true family matriarch. Her yearly Christmas and Fourth of July celebrations helped create bonds through multiple generations of cousins. As a grandmother, Peg provided her ten grandchildren with a center for family gatherings, cousin sleep-overs, long days spent in her pool. There were trips to Disney World, family vacations in the Florida home, and, in later years, evenings in the living room having a cocktail while discussing the state of the world. They were always welcome at Grandma’s and knew that, no matter where they were in the world or their lives, she was there for them. As Jim’s wife, she was a true soulmate. She was by his side for the 35 years of operation of P&J Industries, the plating company Jim established and named for their union. To the employees, she was Mrs. Powers, a beautiful, elegant woman who made each and every one of them know they were valued. To the CEO of the company, Jim Powers, Sr, she was his world. Truly “Peg of his heart.” Left to cherish her memory are her four daughters and sons-in-law Patricia and Frank Slanina, Susan and DJ Kerscher, Caroline and Neil Wakeman, Constance and Doug Schnitkey, daughter-in-law Wendy Powers; grandchildren Matthew Slanina, Maureen (Tommy) Coffey and Meghan Slanina, Jaclynn (Justin) Belville and Danielle Powers, William Kerscher, Lauren (Dominic) Spinale and Jeffrey MacAllister, James and Patrick Powers-Miller; great-grandchildren Brayden, Kaylee and Aubree Spinale, Hadley and Delaney Coffey, Brooklynn and Molly Belville; and brother James Dunn. Besides her parents, Peg was preceded in death by her devoted husband, James Powers, Sr, beloved son James Powers, Jr., cherished twin sister, Patricia Fagnano, and dearest brother Richard Dunn. Services for Marguerite will be private. In lieu of flowers, the family suggests contributions to Alzheimer’s Association or Hospice of Northwest Ohio. Peg’s daughters would like to extend a heartfelt thank you to the staff of The Perrysburg Commons, her home for the past six years. We are forever grateful for your care of and devotion to our mother.

Marguerite (Peg) Mary Powers, 87, of Toledo passed away on Friday, November 30, 2018 at Hospice of Northwest Ohio. Peg was born in Warren, Ohio on March 16, 1931 to Mildred (Vahey) Dunn and James P. Dunn. She grew up in Niles, Ohio with her... View Obituary & Service Information

The family of Marguerite "Peg" Mary Powers created this Life Tributes page to make it easy to share your memories.

Marguerite (Peg) Mary Powers, 87, of Toledo passed away on Friday,...

Send flowers to the Powers family.