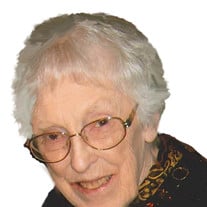 Margie Ainsworth, 96, passed away Monday, October 9 at Hospice of Northwest Ohio, Perrysburg, surrounded by family. Born September 29, 1921, she was a life-long resident of Toledo, attended Gesu grade school, Notre Dame Academy and graduated from Central Catholic High School, class of 1939. She married her husband Tom in 1942, shortly before he was shipped overseas in WW II. When her children were in school, she served as a room mother, active PTA member, and Brownie troop leader. She was a party planner extraordinaire, whether it was for 20 or 200. For years, she provided coffee and Christmas cookies to everyone at the Main Post Office in downtown Toledo, where Tom was employed, and the family Christmas cookie-making tradition continues. The Ainsworth home welcomed everyone, and she became "Mom" to many of her children's friends through the years. Tom and Margie took the entire family on annual road trips, nourishing a love of travel and appreciation for the beauty our country has to offer which has been passed down to later generations. She founded the Toledo Mother of Twins Club in 1953, served as the first President of TMOTC in 1953. She then served again as President in 1960 and was crowned Mother of the Year that same year. For decades, Toledo Hospital referred expectant and new mothers of twins to her for help adjusting to multiple births. She served as president of the Ohio Federation of Mothers of Twins clubs from 1955-1957. Founder and first president of the National Organization of Mothers of Twins Clubs (now known as Multiples of America), she attended conventions all over the country, and served as first contact for medical researchers reaching out to the organization. She was longtime Executive Secretary and spoke at the convention celebrating their 50th anniversary in 2010. A scholarship in her honor was established in 2015. She was an authority on Santa Claus, and gave many presentations on Santa lore to local groups. She received a Historic Research Award from the Memories of Santa collectors group in 1994 for her research on Mrs. Claus. An active member of Christ the King Church since 1956, she was an early member of the Altar and Rosary Society, and organized a Catholic Youth Organization (CYO) for high school students. She planned numerous meetings, banquets, breakfasts, even a CYO play. She also volunteered at Toledo State Hospital and Sunshine Children's Home. Her strong interest in family history led her to do extensive research, and to create books documenting the information for her children and other family members. Most of all, she was a loving mom to her children, caring grandma and "GiGi" to her grand- and great-grandchildren, and a friend to all who met her. She was preceded in death in 2010 by her loving husband of 67 years, Thomas J. Ainsworth; her parents, George Linenkugel Jr. and Minnie Schetter Linenkugel; son-in-law Rudy Sattler; grandsons David and Dennis Turner and Matthew Ainsworth; and brothers-in-law Edward Ainsworth and Richard Ray. She is survived by children Judy (Warren) Turner, Bonnie Miller, Nancy Sattler, Patricia (Emmett) Hannifin, Dawn Marie McGaff; grandchildren Donald (Barbara) and Douglas (Leonora) Turner, Joanne (Ray) Pekich, Sarah (Eric) Driftmyer, Eric (Kelley) and Zachary (Kit) Miller, Cortlund (Holly) and Clinton (Jessica Birdsong) Sattler, Corinne (Asa) Waterstraut, Timothy (Emily) and Bridgette Hannifin, Thomas W. Ainsworth, Erin (Stephen) Boes, Daniel Ainsworth; great grandchildren Max, Henry, Phillip, Nikki (Norm), Staci, Rachel, Eliza Maria, Patrick, Sean, Raven, Grace, Griffin, Kori, Madelyn, Gwen, Garrett, Calib, Peyton, Hayden, Colin and Coraline; great-great-grandchildren Austin, Phoenix, Damlen, Severin and Ari; sister Ruth Ray, brother-in-law Joseph (Priscilla Lewis) Ainsworth, and numerous nieces and nephews. Friends may visit at the Coyle Funeral Home, 1770 S. Reynolds Rd; on Tuesday October 24, 2017 from 2-8 pm, where the Mother of the Twins Club will have a Memorial Service at 6:30 pm followed by the Rosary at 7:00 pm. Funeral services will be held on Wednesday, October 25, 2017 at Christ The King Catholic Church at 12:00 pm, where the family will greet guests starting at 11:00 am. Interment services will follow in Resurrection Cemetery. The family thanks the staff members of Hospice of NW Ohio, Perrysburg, who did so much to ease her final weeks. Donations in Margie's honor may be made to the Marge Ainsworth scholarship fund at Multiples of America Executive Office, 2000 Mallory Lane, Suite 130-600, Franklin, TN 37067-8231 or online at http://multiplesofamerica.org/donate; to Hospice of NW Ohio Perrysburg, 30000 E. River Rd., Perrysburg OH 43551; or to the Cherry Street Mission, 1501 Monroe Street, Toledo, OH 43604.

The family of Margie Mary Ainsworth created this Life Tributes page to make it easy to share your memories.

Send flowers to the Ainsworth family.