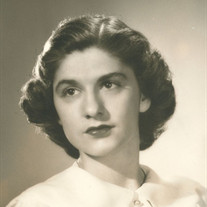 Margaret Mary Moran Stengle, died Friday, September 11, 2020, surrounded by her family in her home. Born July 19, 1927, to Bernard J. Moran and Margaret Mary Mariea, Margaret Mary, and her sister, Barbara Joan, grew up in a loving Irish Catholic home, where St Patrick’s Day was as big of a holiday as Christmas and Easter. Margaret Mary was the first grandchild and leader of the many Moran, Mariea and Miller cousins. She was a parishioner of St. Catherine’s of Siena parish for nearly 65 years and then a loyal and active parishioner at St. Joan of Arc since 1991. Margaret Mary attended Ladyfield Elementary School, and was driven there every day by her father. As education was paramount to both her parents, and Margaret Mary, that was a sacrifice for all involved. Margaret Mary went on to attend Notre Dame Academy, at its original location at Monroe and Bancroft Streets. She excelled there in many areas, serving as class president and salutatorian of the class of 1945. Margaret Mary was the first in her family to graduate from college. Her parents supported her desire, her father saying he would “sell the house if needed” to make sure she could pursue her education. She attended Mary Manse College in Toledo, Ohio where she was a class leader and valedictorian of the class of 1949. Upon graduation from Mary Manse, Margaret Mary taught physics at the University of Toledo. Then, unique for a woman in that time, Margaret Mary pursued a Master’s degree in mathematics at the University of Michigan, graduating in 1952. After graduation from the University of Michigan, Margaret Mary began teaching at Mary Manse College. Margaret Mary had the great fortune of being introduced to her husband, Ed Stengle, by her brother-in-law, Norm Cowell. Ed was a young widower with two small children; they were married in 1956 and Margaret Mary immediately took on the role and responsibility of wife, mother and homemaker. She didn’t stray far from home as she and Ed established a home a block away from her childhood home on Sabra Road in West Toledo. She immersed herself into the lives of her family as she and Ed welcomed three more children into their growing family. Over many years, being involved with St. Angela Hall, St. Catherine’s, St. Francis de Sales and Notre Dame Academy, Margaret and Ed supported their children’s Catholic education and led by example every day. She has instilled her strong faith and family values into our lives for which we are forever grateful. Margaret Mary was a devoted lifelong friend to many. Many of those friendships began in the neighborhood, in elementary school, high school, college and beyond. There were dances, bridge clubs, morning mass and coffee groups, alter and rosary society, monthly “over the hill gang” events and most often Margaret Mary was the leader and convener. They talked regularly, always exchanged written letters and cards, and remained close throughout their lives. After years of raising children and running a household, Margaret returned to teaching. Her students at McAuley High School benefited greatly from her training in geometry and algebra—many former students have told her children over the years that she was one of the toughest but best teachers they ever had. During McAuley High School’s last years, Margaret Mary served as chair of the math department. Margaret Mary lost her only sister in May of 1962 and her husband Ed in May of 1993. She handled those challenges with grace and resolve. After losing her husband Ed, shortly after his retirement, Margaret Mary traveled with family and friends to the beach, Disneyworld, and to her beloved Ireland. She volunteered at her parish, visiting the sick and delivering Holy Communion, spent time with her grandchildren, went to the gym and continued living a full life. Margaret Mary was blessed that all five her children eventually established their own lives here in Toledo. Special mention to daughter, Joan Durham, who was always there for anything Mom needed and served as her primary caregiver in the last few years. The last week of her life she was surrounded around the clock by all of her children, their spouses, and a few of her grandchildren. We are sure she knew we were all there and because of that, she didn’t want to leave. She is survived by her five children, Anne (Karl) Helm, Jim (Barb) Stengle, Joan (Dan) Durham, John (Joyce) Stengle, and Carol (David) Gstalder; her eighteen grandchildren, Eric (Amanda), Kevin (Karen) and Christopher (Lynne) Helm; Sarah, Ryan, Pat, and Sean Stengle; Elizabeth (Chris) Bacnik, Courtney (Gary) Farmer, Ken, Melina, and Joe Durham; Janet, Julia, and Jenna Stengle; Ian (Jeni), Kathryn, and Grace Gstalder; twelve great grandchildren; and sister-in-law Midge Cowell. She was preceded in death by her parents, Bernard and Margaret Moran, sister Barbara Joan (Norm) Cowell, and her husband Ed Stengle. The funeral Mass will be held on Tuesday, September 15 at St. Joan of Arc Catholic Church, 11:30 a.m., where the family will receive guests beginning at 10:00 a.m. Due to COVID-19 restrictions, masks will be required. The Funeral Mass will also be live streamed via St. Joan of Arc’s YouTube channel. Interment will follow at Resurrection Cemetery. Memorial donations may be given to the Ursuline Sisters of Toledo, Ohio. Please leave a condolence message for the family and view Margaret’s video tribute at CoyleFuneralHome.com.

The family of Mrs. Margaret Mary Moran Stengle created this Life Tributes page to make it easy to share your memories.