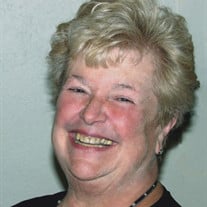 Lynn Anne LeBlanc Brand was born December 26, 1943, in Knoxville, Tennessee and passed away peacefully, surrounded by her children and loved ones, at the University of Toledo Medical Center on June 30, 2020. Lynn was raised in Rochester, New York where her father was employed at the Kodak Corporation as an engineer. She attended Saint Agnes High School in Rochester and studied Elementary Education at Louisiana State University. After returning to Rochester, she taught at Saint Joseph’s Villa and then worked for the City of Rochester with senior citizens and as a recreation leader. She met her husband, Paul, when he was a graduate student at the University of Rochester; they were married July 3, 1971. After he graduated, they lived in Tucson, Arizona from 1973 to 1975 while he had a postdoctoral fellowship at the College of Medicine, University of Arizona. In July 1975, Lynn and Paul arrived in Toledo where he assumed a faculty member position in the Department of Physiology at the Medical College of Ohio at Toledo, now the College of Medicine, University of Toledo. When Lynn arrived in Toledo in July of 1975, she had a son, Owen, and was pregnant with her second child, Renée. By August, with Owen enrolled in daycare, she began volunteering at the Medical College of Ohio. After Renée was born, Lynn continued volunteering while raising two children, working part time as a sales associate and, in later years, experiencing several health problems. Undaunted, she was known to make phone calls from her hospital bed to solicit other volunteers for activities she chaired or to organize fundraising events that benefited the Medical College. While recovering from hip surgery and using a walker, she arranged and participated in fundraising activities despite her limited mobility. She remained cheerful and indomitable throughout. She devoted much of her life to volunteer work and her volunteer efforts in Toledo have spanned 44 years, including supporting the University of Toledo Health Science Campus, the Community Care Clinic, Northwest Ohio Community Services, The Toledo Repertoire Theatre, St. James and St. Patrick of Heatherdowns churches, the Queen of Apostles Catholic School, the Ohio Hospital Association, the American heart Association, and the Boy Scouts. She was active throughout her life in Toledo with the Satellites of the University of Toledo Health Science campus, the volunteer auxiliary that supports campus activities. Since 1975, the Satellites have raised over $2,000,000 for the University of Toledo Health Science Campus. Lynn participated in most of the fundraising activities between 1975 and 2020 and since becoming President of the Satellites, has been the leader and driving force behind most of the activities. Funds raised have supported many College Programs including donating $50,000 seed money to help establish the Educare Center, which provides education, child care, and health care for children, both with and without special needs. The Satellites have also donated to The University of Toledo Early Learning Center, the Prescribed Pediatric Center operated by Anne Grady Services, special education classes of the Toledo Public Schools, and scholarships for health science students. Under her leadership, The Satellites donated $10,000 to the Medical Research Society at the College of Medicine. The Medical Research Society provides funds for young investigators to support their research. From 1999 to 2017, Lynn served on the board of the Toledo Repertoire Theatre, a 501c3 organization. Her service on the board was described in an email from Samanthia Rousos, President of the Board from 2015 to 2017, “She took a primary role for opening receptions as Chairman of Hospitality and brought the rep into the community of not-for-profits, Northwest Ohio Community Shares. In every board meeting -- in the face of adversity or conflicts requiring resolution -- Lynn was the epitome of grace. She sought amicable and workable outcomes. She was always dedicated to improving the state of the performing arts…I am indebted to her selfless dedication, spirit of positivity, and unending giving heart." From 2000 to 2002, she served as State Auxiliary Leader of the Ohio Hospital Association and participated in state-wide meetings in Columbus. As auxiliary leader, she installed officers of local chapters of the association for the auxiliary of Fisher-Titus Memorial Hospital, Norwalk and the auxiliary for the Blanchard Valley Regional Health Center, Findlay. From 2009 to the present, as part of the Support our Troops program, Lynn solicited, collected, and delivered personal items (bath soap, brushes, etc.) to the troops of the 983rd Engineering Battalion in Monclova and the 180th Fighter Wing in Swanton, Ohio. These items are not supplied by the military. Lynn served on the board of Northwest Ohio Community Shares from 2014 to 2019. Community Shares is northwest Ohio’s only workplace-giving federation with a focus on social justice, health and human services, animal welfare, the arts, and the environment. Lynn assisted in organizing the two annual fundraising events hosted by Community Shares and solicited contributions for Community Shares. In 2015, Lynn received the Community Volunteer Award from the Association of Fundraising Professionals for “volunteerism and financial support of The University of Toledo.” As a volunteer and leader, Lynn always gave credit to others. She never spoke of herself but commended her teammates. This extraordinary list of volunteer activities shows only the highlights of her career. Her devotion to volunteering and her loving devotion to her husband and children are unparalleled. She leaves behind her husband Paul, son Owen, his fiancé Shannon Titus, daughter Reneé Obrock (Brand), Son-in-law Matthew Obrock, brother Edward LeBlanc, sister-in-law Cheryl, and innumerable friends in Toledo. A mass will be held in her honor at Saint Patrick’s of Heatherdowns Catholic Church, 4201 Heatherdowns Boulevard at 11:30 Friday July 3, preceded by a gathering of friends at 10:30. The Funeral Mass will also be Live Streamed at Toledo St. Pat’s YouTube channel. Memorial contributions may be made in Lynn’s honor to the UT-HSC Scholarship Fund #1500260, University of Toledo Foundation, 4510 Dorr St., MS #820 Toledo, OH 43615-4040.

Lynn Anne LeBlanc Brand was born December 26, 1943, in Knoxville, Tennessee and passed away peacefully, surrounded by her children and loved ones, at the University of Toledo Medical Center on June 30, 2020. Lynn was raised in Rochester, New... View Obituary & Service Information

The family of Lynn Anne Brand created this Life Tributes page to make it easy to share your memories.

Send flowers to the Brand family.