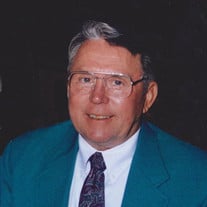 Louis Paul Steinbauer “Louie”, 87, died peacefully at Hospice of Northwest Ohio in Perrysburg on Saturday, May 25th, 2019. Louie had a variety of experiences at a young age and wore many hats during his life. An entrepreneur and President of Glanzman Lumber, he operated his company for 30+ years and was known by many. He was a Partner with his father, Harvey Steinbauer, in several businesses in land development and apartment rentals in South Toledo and Perrysburg. He first learned the building business as a draftsman and carpenter. In later years, Louie continued with his eldest son Harvey operating rental properties. Louie was a proud graduate of Central Catholic High School, a member of The Knights of Columbus, and a parishioner of St. Patrick of Heatherdowns since 1958. A veteran of the Korean War, he was Staff Sergeant, radio operator, tank driver and earned the Combat Infantry Badge proudly worn on his Veterans hat he wore daily. His is survived by his loving wife of 62 years, Joanne (Hoffmann); his three sons, Harvey (Lisa), Mark (Lin), and Joe (Carson); his son in law, Rick Gallaway (preceded in death by his daughter, Karen). He also enjoyed spending time and was blessed with 10 grandchildren; Katie Weaks (Mike), Matthew, Kevin, Lindsay, Rachel, Christopher, and Ella Steinbauer, Shane (Brittany), Rachel, and Brock Donnelly; Great grandchildren, Zachary and Derek Weaks, Hayden Steinbauer, and Blair Donnelly. Additionally, Louie is survived by his only sibling, MaryAnn (Bill) Kelley. Louie enjoyed many years with his family and friends while snowmobiling, fishing, camping, and golfing; even winning several golf tournaments as a member of Heatherdowns Country Club. All these experiences led him to tell many stories, which will be greatly missed, as he will be, having served as both a loving husband and father. Visitation will be at Coyle Funeral Home, 1770 S. Reynolds Rd. Thursday, May 30th from 2-8 P.M. , with a Scripture Service at 7. The funeral will begin in the mortuary Friday, May 31st at 9 A.M. followed by Mass at St Patrick of Heatherdowns at 9:30 AM. Christian burial will be at Resurrection Cemetery. Donations may be given to The Ability Center, St Patrick of Heatherdowns and Hospice of NW Ohio. Please leave a condolence message and view Louie’s Memorial Video Tribute at CoyleFuneralHome.com.

Louis Paul Steinbauer &#8220;Louie&#8221;, 87, died peacefully at Hospice of Northwest Ohio in Perrysburg on Saturday, May 25th, 2019. Louie had a variety of experiences at a young age and wore many hats during his life. An entrepreneur and... View Obituary & Service Information

The family of Louis Paul Steinbauer created this Life Tributes page to make it easy to share your memories.

Send flowers to the Steinbauer family.