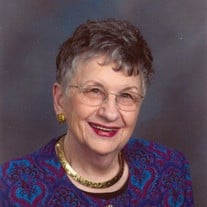 Loretta Rizzo, age 91, of Maumee, Ohio, passed away on Monday, April 22, 2019 at the Elizabeth Scott Community. Loretta was born on January 15, 1928 in Flint, MI. She was the daughter of Theodore Foster and Genevieve Weber, who preceded her in death. Loretta was raised in Toledo, Ohio by her great-uncle and aunt, Walter and Lottie Horne. Loretta attended Whitney High School, graduating in 1945. Following high school, she began work as a stenographer for the City of Toledo Finance Department and ended her career as an administrative assistant for the Vice President of Purchasing at Owens Corning Fiberglas, retiring in 1989. Loretta was a member of the Pedante Club of the International Training in Communication organization (formally International Toastmistress Club), then founded the New Heights Club while working at OCF. She was a member of ITC for over 20 years, holding various positions in the Great Lakes Council, including the position of council president. Loretta was also a member of the Toledo Maumee Valley Unit of the Ohio Association of Parliamentarians for over 10 years. Loretta was an active member of the Catholic church for over 60 years, serving the church community as a member of the SS Peter and Paul, St. James, and Our Lady of Perpetual Help adult choirs, as well as serving as a lector and communion distributor during her many years as a member of OLPH Catholic Church. Loretta was also an active member of the St. Joseph's Auxiliary at the Little Sisters of the Poor in Oregon, and was a volunteer for Mobile Meals of Toledo. Loretta married Felix John Rizzo in 1948 and celebrated 60 years of marriage before his passing in 2009. She is survived by her 10 children: Maria Rizzo (Curtis Hong) of Toledo, Anthony (Linda) Rizzo of Richmond, IN, Jenny (Joseph) Romp of Toledo, Christina Rizzo of Holland, Teresa (Pancho) Casano of Toledo, Phillip (Tshona) Rizzo of St. Augustine, FL, Angela (William) Schmieg of Jupiter, FL, Annette (David) Huffaker of Swanton, Lisa (John) Harrington of Cincinnati, and Joseph (Karen) Rizzo of Loveland; 24 grandchildren, and 8 great-grandchildren. Her sister, Dottie Richard of Topeka, KS, also survives, along with several nieces and nephews. Friends may visit at the Coyle Funeral Home, 1770 S. Reynolds Rd., on Sunday, April 28th from 2-8 p.m. where a Scripture Service will be recited at 7:00 p.m. Funeral Services will be held on Monday, April 29th beginning at 9:15 a.m., in the mortuary, followed by a Funeral Mass at Our Lady of Perpetual Help Church at 10:00 a.m. Interment will follow at Resurrection Cemetery. Memorials may take the form of contributions to Our Lady of Perpetual Help Church or to Hospice of Northwest Ohio. Please view and sign the online guest registry at www.coylefuneralhome.com

Loretta Rizzo, age 91, of Maumee, Ohio, passed away on Monday, April 22, 2019 at the Elizabeth Scott Community. Loretta was born on January 15, 1928 in Flint, MI. She was the daughter of Theodore Foster and Genevieve Weber, who preceded... View Obituary & Service Information

The family of Loretta Ann Rizzo created this Life Tributes page to make it easy to share your memories.

Send flowers to the Rizzo family.