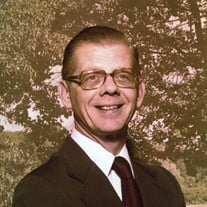 Lisle E. Nied, age 91 of Toledo, passed away peacefully on November 11, 2021. He was born to Linus and Margaret (Watson) Nied on November 28, 1929. He graduated from Devilbiss High School and then he served his country proudly in U.S. Marine Corp. during the Korean War. Lisle married Marilyn Joyce Pettis on October 20, 1951 and together they raised 4 children. He spent his career working as a Parts Manager for Century Toro until the time of his retirement. He was a longtime member of Monclova Road Baptist Church and was an avid Ohio State Football and Detroit Tigers fan. He married Helen Handy on September 4, 1981 and they were married for 25 years. Lisle had a great sense of humor and a joke for everyone. He was preceded in death by his parents; wife, Helen; grandson, Michael Nied and brother, Ovid Nied. He is survived by his children, Linda Gokey, Sharie (Tim) Foley, David and Jim (Melanie) Nied; grandchildren, Alan Nied, Melissa and Chris Foley, Ashley (Lou) Hartman, Robert (Jessi) Nied; great-granddaughter, Emersyn Nied; half-brother, John Nied; special friend, Carol Jacobs, as well as several nieces and nephews. A Memorial Service will be held at Monclova Road Baptist Church, 7819 Monclova Rd., Monclova, OH 43542, on Tuesday, November 16th at 11:00 a.m. where the family will begin greeting guests at 10:00 a.m. A private interment will be held at Toledo Memorial Park at a later date. The family would like to extend a special thank you to the staff at Hospice of Northwest Ohio, Perrysburg for their compassionate care. Memorials may take the form of contributions to Hospice of Northwest Ohio or to Monclova Road Baptist Church. Please view and sign our online "guest registry" at CoyleFuneralHome.com

Lisle E. Nied, age 91 of Toledo, passed away peacefully on November 11, 2021. He was born to Linus and Margaret (Watson) Nied on November 28, 1929. He graduated from Devilbiss High School and then he served his country proudly in U.S. Marine... View Obituary & Service Information

The family of Lisle E. Nied created this Life Tributes page to make it easy to share your memories.

Send flowers to the Nied family.