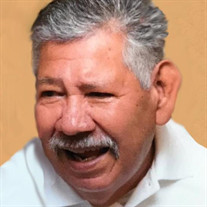 Leandro “Lee” Lopez, Sr. left his family to the comfort of the Lord on April 26, 2020 in the presence of his loving wife, Minerva and grandson, Andy. Lee was born in Mercedes, Texas on November 2, 1938. Lee was a migrant worker for the majority of his young life until his father passed away in Toledo, Ohio. He was the oldest son and still a teenager when his father passed. Lee became the man of the household at a young age. Lee shared countless times that he really didn’t know what he was doing but he tried his best to protect his five siblings and his mother. At the age of 19, Lee met his wife, Minerva Rangel, downtown while they were both attending a movie at the Valentine Theater. They married on November 21, 1957. Through their marriage of 63 years, they had seven children: sons, Lupe (Juliana), Lee, Jr. (Vicki), Danny (Monika,); daughters, Virginia Marie, Yolanda, Matilda (Richard) and Anita. He has 14 grandchildren: Breanna, Lupe, Gabriel, Jeremy, Steven, Melissa, Jason, Robert, Daniel, Amber, Samantha, Brittney, Armand and Andres and countless great grandchildren. In addition to his family, he was surrounded by his fierce loyal Chihuahua, Minnie. Lee believed in working hard to support his family and after settling in Toledo, he learned the trade of meat cutter. Lee helped organize one of the first meat cutter unions in Toledo and became a union steward. After earning more money, Lee was very proud to purchase his first home on Thayer Street in South Toledo where he would raise his entire family. Lee remained employed as a meat cutter until his health forced him to file for disability. After he was unable to work, he became very active in his grandchildren’s lives. He was always home and able to be with them whenever his children needed support. Lee loved his family, thoroughbreds and shooting pool. He loved spending a day at the Detroit Race Course and Raceway Park on many Spring & Summer Saturdays with his family. He also loved playing pool in many leagues and at one time went to Las Vegas to compete. Later in life, he started to enjoy going to Hollywood Casino with his wife. Lee was preceded in death by his father and mother; his younger brothers Jose and Johnny Lopez. He is survived by all his children and grandchildren. He is also survived by all three of his sisters: Rose Jankowski (Tom,) Lucy (Robert) Torres, and Mary Lopez as well as countless nieces and nephews. A private burial will be held during the summer at Resurrection Cemetery. The family thanks Coyle Funeral Home for their kindness and services. Special thanks to Father Molina of SS. Peter and Paul Church for his time and prayers with our family. Please view and sign the guest registry at coylefuneralhome.com.

The family of Leandro Lopez created this Life Tributes page to make it easy to share your memories.

Leandro “Lee” Lopez, Sr. left his family to the comfort of the...

Send flowers to the Lopez family.