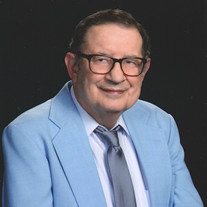 Larry R. Dargart passed into Eternal Life on November 5, 2019 at Ohio Living Swan Creek where he had lived since July of this year. Previous to that he had lived at Parkcliffe Memory Care Facility since November 2016. He was born to Elvin and Leona (Myer) Dargartz on June 27, 1942. He graduated St. Francis deSales High School in 1960 and Toledo University in 1963. He served in the Army National Guard. Larry was a member of St. Joan of Arc Catholic Church, a member of their Knights of Columbus Council #15905 since its beginning. He had been a Fourth Degree Knight since 1972. Larry was a fan of Ohio State, Cleveland Indians, and Cleveland Browns. Larry met Nancy Cataldo when they were attending Toledo University and they were married on May 29, 1965 at Holy Rosary Church. They lived in Toledo and Monclova Township. He began working for The Ohio Department of Transportation on November 23, 1963, the day that John Kennedy was shot. He started by inking drawings, inspecting bridges, issuing permits and eventually working up to the position of Deputy Director of Personnel, retiring in 2000. Larry was also a Realtor and Appraiser for many years, having worked for Grogan Real Estate and DiSalle Real Estate. Larry and Nancy loved to travel. They took various cruses and went on pilgrimages to Italy and the Holy Land. The visit to the Holy Land was especially memorable because they were walking were Jesus had once walked. Larry is survived by his wife Nancy; his daughters, Julie Dargart-Willet and her husband, Jack Willet, Mindy Catalano and her husband, Steve, Jamie Dargart and her husband, Bob Woodyard; his beautiful grandchildren, Annalena Willet; Stephen, Dominic, Christina and Anthony Catalano, Theresa and Gabriel Woodyard; brother-in-law, Michael Cataldo, sisters-in-law Ann Collins, Gina Cataldo and Faith Gauger, and nieces Debbie and Patti Cataldo. Larry was preceded in death by his parents, Nancy's parents, Tina and Angelo Cataldo and brothers-in-law Nicholas Cataldo and Joseph Cataldo and Ted Collins. Visitation will be held at the Coyle Funeral Home, 1770 S. Reynolds Rd. on Monday, November 18, from 3-8 p.m. with a Scripture Service at 7. The funeral Mass will be held Tuesday, November 19 at St. Joan of Arc Church at 10:30 a.m. with an hour of visitation beginning at 9:30. Immediately following the funeral Mass, a luncheon will be served in the Atrium of the church. Burial will be at Resurrection Cemetery. In lieu of flowers, memorials may be made to St. Joan of Arc Church or St. Francis de Sales School. Please view Larry’s Memorial Video tribute and leave a condolence message for the family at CoyleFuneralHome.com. The family would like to thank Parkcliffe Memory Care, Ohio Living Swan Creek and Ohio Living Hospice for their loving, compassionate care of Larry.

Larry R. Dargart passed into Eternal Life on November 5, 2019 at Ohio Living Swan Creek where he had lived since July of this year. Previous to that he had lived at Parkcliffe Memory Care Facility since November 2016. He was born... View Obituary & Service Information

The family of Larry Ronald Dargart created this Life Tributes page to make it easy to share your memories.

Send flowers to the Dargart family.