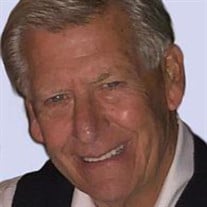 Larry E. Beebe, age 73, of Maumee, Ohio passed away Monday, May 24, 2021, at H. Lee Moffitt Cancer Center in Tampa, Florida. Larry was born June 14, 1947, in Toledo Ohio, one of three children to Otto and Lucille Beebe. He was a proud graduate of Maumee High School (class of 1965) where he developed a love for baseball and sports cars. His years spent at MHS brought a lasting connection to the school as he recently chaired the 50 year reunion of his graduating class. In addition, he was a member of the Panther Pride Foundation raising funds for their $2.6 million dollar Richard Kazmaier Stadium renovation. Larry's valiant attitude led to a successful 50+ year career that began in August 1970 with New York Life Insurance Company. He held various board member and executive level positions within the industry such as NYL Agents Advisory Counsel, Chairman of the Finance Committee of NYLARC (Agent Owned Reinsurance Company), Charter Member of the Nautilus Group, Past President of the Toledo Estate Planning Council, 49 years of NYL Councils, and was a lifetime member of the Million Dollar Round Table. In 1995, Larry started his own business, Beebe Financial Services, where he concentrated on business succession and estate planning. He thoroughly enjoyed assisting individuals, business owners, and families plan for their futures. Larry touched countless lives through that time and fostered those relationships through generations of families as they grew. Beebe Financial Services became Evans, Beebe and Fields Financial Group in 2017. As Larry's career blossomed, he found tennis to be a great outlet and played competitively for the better part of 30 years at Laurel Hill Tennis Club and later golf became his next endeavor. In fact, he met the love of his life, Teresa, while playing golf at a corporate golf outing and married her in 2002. He was devoted to her and cherished their time together. Larry and Teresa joined Toledo Country Club, where they have been members for a long time, and it held a special place in his heart. Larry and Teresa were also members of Trinity Lutheran in Toledo and First United Methodist Church in Sarasota. Larry was incredibly proud of his two daughters, Tiffany and Megan. He loved them so much and it gave him such joy to watch them grow into strong, independent and successful women. Spending time with his grandchildren brought happiness beyond measure and he truly treasured every moment with them. Whether it was playing tennis or golf with his daughters and grandchildren, playing golf with his wife and friends, Larry gave it his all. His competitive, fun and adventurous spirit stayed with him his entire life. In recent years, he and his wife purchased a 1946 log cabin on the AuSable River in northern Michigan where they enjoyed the simple life and made many memories with family and friends, especially his grandchiildren. They also enjoyed spending the winters in their Sarasota home, playing golf at TPC Prestancia, and enjoying time with their many Florida friends. Preceded in death by his parents, Otto and Lucille Beebe; his sister, Anne Beebe and brother, Terry Beebe. He is survived by his loving wife, Teresa and daughters, Tiffany (Casey) Lehman and Megan (David) Evans; four grandchildren, Eliza, Isaac, Maggie and Addie and four grand dogs Max, Hank, Maizy, and Charlie. The family will receive friends at Coyle Funeral Home, 1770 S. Reynolds Road in Toledo on Thursday, June 3rd from 12:00-3:00 p.m. and 5:00-8:00 p.m. The funeral service will be held Friday, June 4th at 10:00 a.m. at Trinity Lutheran Church, 4560 Glendale Avenue in Toledo. The burial ceremony at Ottawa Hills Memorial Park following the funeral service will be private. In lieu of flowers, friends may make memorial contributions to the Good Grief of NW Ohio, Maumee High School, or a charity of their choice. Please view and sign our online "guest registry" at CoyleFuneralHome.com

Larry E. Beebe, age 73, of Maumee, Ohio passed away Monday, May 24, 2021, at H. Lee Moffitt Cancer Center in Tampa, Florida. Larry was born June 14, 1947, in Toledo Ohio, one of three children to Otto and Lucille Beebe. He was a proud graduate... View Obituary & Service Information

The family of Larry Edward Beebe created this Life Tributes page to make it easy to share your memories.

Send flowers to the Beebe family.