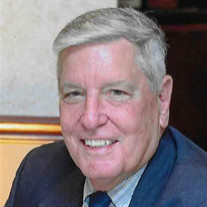 On September 22, Saturday evening, Kevin Xavier Smith negotiated his final contract, entering heaven to be with God and his parents, Kevin F. and Pat (Schoen) Smith. Kevin was a very proud alumni of St. John’s Jesuit High School (’70), Xavier University (’74) and the University of Toledo College of Law (’77). Kevin worked as CEO and Legal Counsel of the AGC of Northwest Ohio since 2010. He previously served as Vice President of Business Development at Bostleman Corp, but more importantly, as a volunteer on board positions for organizations to include Make-A-Wish, Catholic Charities, Toledo Botanical Gardens, Toledo Rotary, Toledo Public Schools Community Oversite Committee, and Finance Committee for Our Lady of Perpetual Help Church and School. His favorite meeting room was always a golf cart, which precipitated his service as a Board of Trustee member and President of Toledo Country Club from 1998-2004. Because of this history and dedication to his community, Kevin earned the Davenport-Longnecker Lifetime Achievement Award in 2016, inducting him into the Entrepreneurial and Business Excellence Hall of Fame. Kevin spent countless hours coaching children for YMCA basketball and CYO sports through Our Lady of Perpetual Help School. He would say it was one of his most rewarding experiences. Though many of his accomplishments are listed, his greatest gift was his love and devotion to his family. He married the love of his life, Mary Pat Vandenbroek, in 1985 and was blessed with four children; Devon (Jared Depa), Connor, Colin, and Moira. Recently, Kevin’s favorite role has been as grandfather (Bop Bop) to his grandson, Jack (Devon and Jared). Born February 10, 1952, Kevin was the oldest of seven children; Christie (Frank) Stichter, Sheila (Tom) Flanagan, Mike (Pat), Shelley (Dan) Murnen, Laurie (Jeff) Yeager, and Pete (Alexis). Also, cherishing his memory are James and Dorothy Vandenbroek, Karen (Jim) Buyakie, Robert Rozanski, Mark, Sue, Dan, Steve (Tammy), Amy (Gary) Wolfe, Andrew (Heather), Julie (PJ) Cousino, Katie (Chris) Kokotaylo, Rob (Dawn), Eric (Jodi), Stephanie (Bryan) Betkey, and Jeremy. He is succeeded by too many cousins, nieces, and nephews to count. We welcome you to help us celebrate the incredible life of someone who has meant so much to so many people by joining us at Coyle Funeral Home, 1770 S. Reynolds Rd. on Thursday, September 27th from 2-8 pm with vigil service at 7pm. Funeral Services will be held on Friday, September 28 beginning at 9:15 am in the mortuary followed by a Funeral Mass at Our Lady of Perpetual Help Catholic Church at 10am. Interment Resurrection Cemetery. Memorial contributions may be made to St. John’s Jesuit High School Kevin F. Smith scholarship fund or Make-A-Wish. Please view and sign the online guest registry at www.coylefuneralhome.com

The family of Kevin Smith created this Life Tributes page to make it easy to share your memories.