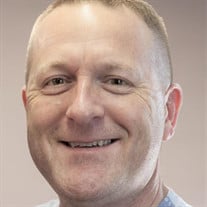 CLICK HERE to view the recorded version of the LiveStream of Kevin's Memorial Service. Kevin Jerome Dumas was called to Heaven on the morning of Thursday, November 26, 2020, at the age of 48. Kevin was born on June 26, 1972, in Toledo, Ohio, to John and Joyce Dumas. He was a 1990 graduate of St. John's Jesuit High School, and at the age of 16 he began his career with Kroger. Over the years he worked many part-time security positions and instructed at USA Martial Arts, but in 1999 Kevin landed his dream job and joined the Toledo Police Department. Kevin loved being a police officer, and that was evident throughout his career. During his employment with TPD, Kevin spent time in several roles. He started as a patrolman in 1999, and he was tasked to Toledo's very first Mountain Bike Unit in 2002. He then transitioned to the Toledo SWAT team in 2008, and after 8 years of kicking down doors, he decided to pursue his calling to teach. In 2016, Kevin became an instructor at the Toledo Police Academy, and he spent the last four years molding and mentoring the future of TPD. Kevin had four ladies that were the light of his life. First was his eldest daughter, Sarah Dumas, who was born in 1992. Next was his soulmate Amy Haaser whom he fell head over heels in love with in 1997, and eventually married in 2004. Amy was the Robin to Kevin's Batman; they were truly the Dynamic Duo. They were then blessed with two more daughters; Grace Dumas in 2006 and Maggie Dumas in 2012. Kevin was a strong, tenacious force that accomplished anything he put his mind to. He was a family man above all else, but he also had a lifelong passion for martial arts. He spent the better part of his life training and competing with his kung-fu crew, trying to master his craft. It was impossible to feel anything but safe with him. Later in life he found a love for cooking, more specifically, grilling! If you wanted to find Kevin on a night off, you'd likely find him grilling up some meat with a beer in hand. He was a man's man and a teddy bear too; a perfect balance of fearlessness, compassion, and a laugh that could fill a room. Kevin is survived by his loving wife of 16 years, Amy; daughters Sarah, Grace and Maggie Dumas; parents John and Joyce Dumas; brother Brad (Tara) Dumas; sister Jackie (Frank) Marcinkiewicz and several nieces and nephews. Friends may visit at the Coyle Funeral Home, 1770 S. Reynolds Rd., on Thursday, December 3rd from 2:00-6:00 p.m. Face masks and social distancing will be required. Due to the pandemic, Kevin's Memorial Service will be private. In lieu of flowers, the family asks that donations be made to the Kevin Dumas Memorial Fund. Donations may be made at either the Toledo Police Credit Union or the Toledo Firefighters Credit Union. The Dumas Family requests that anyone that would like to share a meaningful memory or funny story, please post it on the tribute portion under Kevin's obituary on the funeral home's website.

[CLICK HERE]https://vimeo.com/489444971/07647c3b43 to view the recorded version of the LiveStream of Kevin's Memorial Service. Kevin Jerome Dumas was called to Heaven on the morning of Thursday, November 26, 2020, at the age of 48. Kevin... View Obituary & Service Information

The family of Kevin Dumas created this Life Tributes page to make it easy to share your memories.

CLICK HERE to view the recorded version of the LiveStream of...

Send flowers to the Dumas family.