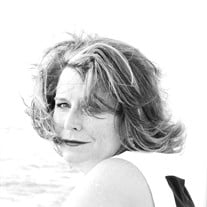 On April 13th, 1969 a miracle was delivered to us, Kerrie Hassan (Donovan), of Toledo, Ohio, by her loving parents Dr. Robert Leo and Rita Ann Donovan (Scoones) of Peoria, Illinois. She married Jeffrey Hassan (from Celina, Ohio) on June 25th, 1995 at St Mary’s Cathedral in Peoria and left us on July 11th, 2018 at the age of 49 at 4:15 a.m. from the Cleveland Clinic in Cleveland, Ohio. Her life changed the face of a 49-year battle with Alpha-1 Antitrypsin Deficiency on her way to the golden liver she so bravely earned in the arms of our heavenly father. Kerrie is survived by her husband, Jeffrey, 2 sons; Nicholas (18) and Jackson (12). She is also survived by her 6 siblings Tim (Jillian) Donovan, Kathy (Peter) Ambrose, Patty (Dave) Duclos, Julie (Dave) Petri, Sallie (Bruce) Vanzo, & Matt (Angela) Donovan, 14 Nieces and Nephews and her mother-in-law, Sue Hassan, in Celina, Ohio. Kerrie was preceded in death by her father, father-in-law Clark Hassan, and her daughter Madeline Ann. She graduated high school from Academy of our Lady/Spaulding Institute in Peoria, in 1987 and received her Bachelor’s Degree in Business Administration & Special Education from Western Illinois University in 1991. Following college, she worked for Stouffer Hotels & Resorts in Cleveland, Ohio where she met her husband of 23 years. Over those 23 years, she happily relocated 11 times in support of her husband’s career in Hotel Management (Dayton, St Louis, Columbus, Winston-Salem, Tulsa, Oklahoma City, Ft Lauderdale, Atlanta, Melbourne, FL, Houston and Toledo). Kerrie was dedicated to so many things in her life. However, two things were her top priority, her children and her beating her lifelong disease. The children came easy to her because of how her mother raised her. She was a loving, caring mother. Her disease, however, was a lifelong undertaking from when she was first diagnosed as a small child with a liver deficiency. Initially discovered by doctors at St Louis Children’s Hospital in the early 70’s. Kerrie, along with her mother as the driving force, set out to rid her and others of this liver disease. Kerrie visited doctors from Columbus, OH to Oklahoma City, Atlanta, Pittsburg, Houston, and Cleveland. She was passionate and vibrant and a true warrior in the daily struggle her disease presented her with. She empowered herself with knowledge of her disease which in turn aided her medical team of experts in treating Alpha-1 patients. She traveled many places alone and with her family to receive treatment. This morning, she won that battle and received the perfect liver from our heavenly father. He accepted her into his arms and freed her from her sickness. Heaven celebrated her arrival. Friends may visit at St. Joan of Arc Catholic Church on Saturday, July 14 from 9:30 a.m. until the beginning of the funeral mass at 10:30 a.m. Interment will be private. Coyle Funeral Home is assisting the family with arrangements. Please view Kerrie’s memorial video tribute and leave a condolence message for the family at CoyleFuneralHome.com.

The family of Kerrie Louise Hassan created this Life Tributes page to make it easy to share your memories.

Send flowers to the Hassan family.