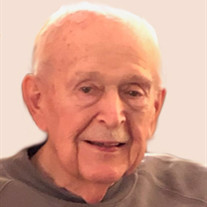 Kenneth W. Samson ("Ken") was born on September 28, 1936, at home, on Ryan's Alley, in Crystal City, Missouri, (or "Missoura," as he called it). His family relocated to Rossford, Ohio in 1944 and he attended Eagle Point Elementary School. His family soon moved to Toledo where Ken attended Jones Junior High and Libbey High School. Upon graduation, Ken attended Toledo University and studied Mechanical Engineering. During this time, he met the love of his life, Nancy Wehrmeister, whom he married on June 14, 1958 and remained devoted to for over 63 years. Ken began his career as draftsman at Tillotson Carburetor before joining Owens-Illinois where he assisted in starting the company's first plastic bottle line. He remained at Owens-Illinois for over 40 years becoming one of the lead engineers and founders of the plastic container industry's 'Designs and Standards' that are still used to this day. Ken and Nancy gave birth to two children, Jim and Mike. Ken mentored his boys in boating, sports, business, maintenance and all aspects of life. Both boys have started their own families. Jim married Cindy (Martin) in 1992 and Mike married Kelly (Bucher) in 1996. Ken enjoyed camping and boating, for over 35 years at Bay Point Resort in Marblehead, Ohio. During his retirement, Ken focused on his hobby as a gardener. He was an assistant in planting operations at Hoen's Garden Center and would often plant his creations in his own gardens. To remain active, he was involved in the Golden Emblem Club of O-I, where he served in all offices, including multiple terms as President. Ken was also involved with St. Patrick of Heatherdowns Catholic Church serving as an usher and Eucharistic Minister. Ken spent large amounts of time with his wife and family and positively influenced the lives of his three grandsons, Ben, Tyler and Dylan. Ken was preceded in death by his parents, Clarence and Lucille and is survived by his wife, sons, grandsons and his brother, Roger (Sharon) Samson, as well as, many nieces and nephews. Ken was at peace with Nancy at his side as he was welcomed into heaven to be with his Lord and Savior, Jesus Christ. Friends may visit at the Coyle Funeral Home, 1770 S. Reynolds Rd., on Wednesday, July 21st from 3:00-7:00 p.m. where a Scripture Service will be recited at 7:00 p.m. Funeral services will be held on Thursday, July 22nd beginning at 9:30 a.m., in the mortuary, followed by a Funeral Mass at St. Patrick of Heatherdowns Church, 4201 Heatherdowns Blvd., Toledo, OH 43614 at 10:00 a.m. Entombment Ottawa Hills Memorial Park. In lieu of flowers, the family suggests a donation to the retired Catholic clergy of Toledo, Ohio via the Perpetuate the Gift fund at www.toledodiocese.org

Kenneth W. Samson ("Ken") was born on September 28, 1936, at home, on Ryan's Alley, in Crystal City, Missouri, (or "Missoura," as he called it). His family relocated to Rossford, Ohio in 1944 and he attended Eagle Point Elementary School.... View Obituary & Service Information

The family of Kenneth Samson created this Life Tributes page to make it easy to share your memories.

Send flowers to the Samson family.