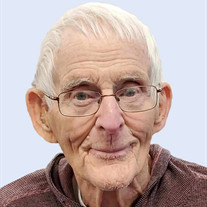 Kenneth Bender, 93, of Toledo, Ohio passed away March 15, 2020. Ken was born in Toledo, Ohio on June 7, 1926 to Bert and Ruth (Smith) Bender. Ken proudly served The United States Navy during World War II in the South Pacific Theater on a destroyer—USS Case (DD-370). He also worked on Great Lake Freighters. After being discharged from The United States Navy, Ken met the love of his life, Marie Wagner. They married on Aug. 7, 1948. They settled into a happy life and began a family. After his wife passed, he joined his daughter’s household and was very active. Included in his experiences, but not limited to these, he attended an Atlanta Braves game, visited The Smokey Mountains, went on the Honor Flight to Washington, took classes at The Toledo Museum of Art, and trained to become a Wood County Parks Volunteer. He was a constant spectator at his grandson’s sporting events. He enjoyed being with others and was a calm, smiling presence people looked forward to seeing in the community. He will be greatly missed. Ken was a member of Trinity Lutheran Church. Ken was preceded in death by his son, Kenneth N. Bender, and his wife, Marie Bender. Surviving is his daughter, Janice (Richard) Bender-Benner; son, Thomas (Kathie) Bender; grandchildren, Lindsey Benner, Jacob Benner, Abigail (Trevor) Reiter, and Callie Bender. Also, surviving are Kenneth’s brothers Arthur and Bert (Rollie) Bender. Private services for immediate family only per Ken’s wishes. In lieu of flowers, Ken requested donations be made to the Toledo Area Humane Society or a charity of your choice. The Coyle Funeral Home is assisting the family with services. Please view the online guest registry at CoyleFuneralHome.com

The family of Kenneth Roland Bender created this Life Tributes page to make it easy to share your memories.

Send flowers to the Bender family.