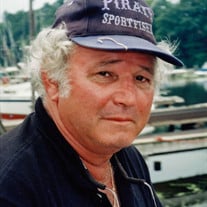 Keith Poland, of Waterville, a long-time and well-known Great Lakes fishing guide, died Sunday (June 3) in St. Luke’s Hospital in Maumee. He was 72. His wife, Sandra, said that he had non-Hodgkin's lymphoma and other health complications. He attended Longfellow School and was a 1963 graduate of DeVilbiss High School, where he ran track and starred in football. “They called him ‘The Dazzler’ at DeVilbiss in football,” said Sandra Poland. “He played offensive and defensive end, Number 88.” He was inducted into the DeVilbiss Sports Hall of Fame in 2009. Following high school, he joined the construction trades with Edward Kelly & Sons, Inc., an area water and sewer contractor. “I always said that he got his B.S. degree from the School of Hard Knocks,” said Sandy. “He loved construction; he operated the big machines. He was good at it, and was given a foremanship by age 30. “But he came home one day and said, ‘I’m not going to be in construction any more. I’m going to be a fishing captain’.” Thus Keith launched a 37-year career in which he listed himself as a “boat captain,” and his occupation as “fishing.” He was a licensed charter fishing guide, and named his business “Pirate Sportfishing.” His boats all sported stylized white-on-black “Pirate” pennants. Over the years Poland fished his boats in western Lake Erie for walleye and yellow perch, docked at Meinke West Marina in Curtice. He also fished Lake Huron and its famed lower Au Sable River for salmon and steelhead trout, and western Lake Ontario out of 4Cs Marina at Point Breeze, for several species of salmon and trout. In the early 1980s he became one of the early guides who back-rowed Pacific Northwest-style driftboats down the lower Au Sable above Oscoda, Mich. He was very successful and always credited much of his reputation as a top driftboat “guide to the tutelage” of the late Jim “Grampaw” Reinke, a veteran Oscoda guide. They were based at the Bunyantown Marina on the Au Sable at the U.S. 23 river-crossing. The Poland boats over the years, beginning in 1980 with a relatively small, 25-foot Starcraft boat, always carried “Pirate” names – Pirate Lady for the first boat and its successor, a 29-foot Aquasport, and later additions, a pair of 31-foot twin-engine Tiaras that carried much of Keith’s career, the Snow Pirate and Pirate Queen. The little bright red Au Sable driftboat was the River Pirate. Poland was a genial guide and host to his customers and friends, and he was a master storyteller and jokester. “I just loved his stories,” said Sandy, “and he always had one. He knew no strangers.” He was a member and supporter of the West Sister Charter Boat Association, but was known for not engaging in political issues especially while “on duty.” His focus was on fishing. Each year as late winter turned to early spring, his spouse recalls, “he’d nearly jump out of his skin to get going.” He enjoyed being addressed as “Captain Keith,” and over the years his massive, bearlike size earned him less than flattering if good-natured nicknames that often were used on the docks and on the lakes. He took it all with good grace. “Keith was a wonderful person,” said Rick Ferguson, proprietor of Al Szuch Live Bait on Corduroy Road in Curtice. He is a long-time friend and business associate. “He was a great partner at Al Szuch Live Bait and will be sorely missed. All the employees at Al Szuch and all the employees at Meinke West will miss him big-time.” He was born Sept. 29, 1945, in Findlay to the late Maxwell Keith Spencer and Mildred Nettie Topping, and was adopted at age 12 by Clifford Carlton Poland. He married Sandra Ahlgren in 1970. In addition to Sandra, survivors include daughter, Jolene Poland, of Indianapolis; son Mark Poland (Diane Huss), of Dayton; brother David (Robin) Poland, of Toledo, and sisters, Jan Roby, of Alabama, and Jill Vershun, of Texas. He was preceded in death by his parents, brother, Brent, and grandson, Robert Huss. “We would like to give special thanks to the dedicated and skilled doctors and nurses at St. Luke’s intensive care unit and Toledo Clinic, business associates and family and friends,” said Sandra. “His fishing, his friends, and his family – those were his biggies.” A visitation and celebration of life service are set for Friday, June 15, at Coyle Funeral Home and Cremation Services, 1770 South Reynolds Rd. Visitation is set for 3 to 6 p.m., with service at 6 p.m. The family requests that any tributes be in the form of contributions to Great Lakes preservation and conservation organizations, or the Toledo Humane Society, Cherry Street Mission, Toledo Northwestern Ohio Food Bank, or SeaGate Food Bank. Please leave a condolence message and view Keith’s video tribute at CoyleFuneralHome.com.

Keith Poland, of Waterville, a long-time and well-known Great Lakes fishing guide, died Sunday (June 3) in St. Luke&#8217;s Hospital in Maumee. He was 72. His wife, Sandra, said that he had non-Hodgkin's lymphoma and other health complications. He... View Obituary & Service Information

The family of Keith Poland created this Life Tributes page to make it easy to share your memories.

Keith Poland, of Waterville, a long-time and well-known Great...

Send flowers to the Poland family.