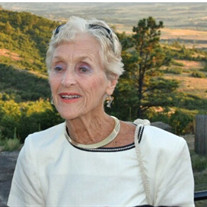 Kathleen (Katie) Marie Rensch passed away peacefully in her Clark Lake, Michigan home on March 7. The daughter of the late Fleurange (Cunningham) and Aloys Rensch, Katie was born on September 13, 1926 in Toledo. She was a summer and later full-time resident of Clark Lake, growing up in the cottage built by her grandparents in 1907 which she and Sister Mary converted to their permanent residence in 1992. Kathleen graduated from St. Ursula Academy in Toledo and attended the University of Toledo. In her teens she helped with seasonal work at her family’s imported food business, A. Rensch & Company, in downtown Toledo. Her career as a secretary included placements with the General Mills Corporation and for many years, Owens Corning Fiberglas Company. She also served as a legal secretary for Toledo patent attorneys, Owen & Owen, and later Willian, Brinks, Olds, Hofer, Gilson, & Lione in Lambertville, Mi. Katie traveled the world, usually with her sister, Mary, including a visit to the Rensch family in Switzerland; Hawaii though was her favorite destination. She enjoyed summer and winter sports including snow and water skiing, and was an early member of the Toledo Ski Club. Katie discovered her artistic talents early in life and was known for family portraits, landscapes and lake and ocean scenes. Katie was known to have a soft spot for canine friends and was always ready with a treat, especially at her back door for neighbor dogs on their daily visits. Katie was predeceased by her parents and sisters, Angela Rensch (William) Ligibel and Mary Frances Rensch. Surviving are her nieces and nephews, W. Michael (Nancy) Ligibel, Theodore (Patricia) Ligibel, Angel Ligibel (James) Dandar, and Rebecca Ligibel, as well as great nieces and nephews Jennifer Ligibel, Geoffrey Ligibel, Bradley Ligibel, Ross Ligibel, Jamie Dandar McKenny, Colleen Dandar Tankoos, Sally Dandar Lyons, and Brandi and Noah Zak. Eleven great-great nephews and nieces also survive. Katie was a member of Gesu Catholic parish in Toledo and also attended St. Rita’s Catholic Church at Clark Lake. Services will be private with internment at Calvary Cemetery in Toledo. Donations in Katie’s memory may be made to the Clark Lake Spirit Foundation (www.clarklakespirit.com).

Kathleen (Katie) Marie Rensch passed away peacefully in her Clark Lake, Michigan home on March 7. The daughter of the late Fleurange (Cunningham) and Aloys Rensch, Katie was born on September 13, 1926 in Toledo. She was a summer and later... View Obituary & Service Information

The family of Kathleen Rensch created this Life Tributes page to make it easy to share your memories.

Kathleen (Katie) Marie Rensch passed away peacefully in her Clark...

Send flowers to the Rensch family.