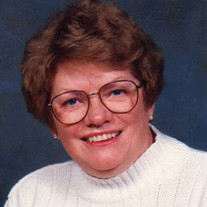 KATHLEEN ELEANOR CARLUCCI Kathleen E. Carlucci, 95 years passed away at Addison Heights Care Center in Maumee, OH surrounded by her loving family on October 3, 2017. She was born July 30, 1922 in Toledo, OH to Tom and Miretta (Walsh) Chambers. Kathleen married her loving husband Michael V. Carlucci on October 21, 1950 who preceded her in death in June of 1977. Kathleen was a lifelong resident of the Toledo area. She was a graduate of St. Ursula Academy and a longtime member of Regina Coeli Parish. She was also a member of Blessed Sacrament and Christ the King Parishes. For Kathleen family and friends were everything. She was always attentive to special events and birthdays, being certain to remember them all. Following the loss of her husband Mike she had a group of very close friends that were very kind to her. She was an excellent cook as well and learned all those special Italian recipes from her husband’s familia in New Jersey. Kathleen is survived by her sons, Louis M. (Kristi Stuckwisch) Carlucci of Gilbert, Arizona and Robert J. (Karen) Carlucci of Maumee, Ohio as well as her seven grandchildren, Amy Carlucci-Steele, Angie (Steve Hardy) Carlucci-Green, Robby Carlucci, Michelle Carlucci, Brian Carlucci, Kelly (Mark) Trozzo and Logan Duran and five great-grandchildren. In addition to her husband Michael V., Kathleen was preceded in death by siblings Richard Chambers, Mary Chambers Pavuk, Galen Chambers, Jacqulyn Chambers Craft and James Chambers. She was also preceded in death by her special Aunt Stella Lowry and Uncle Frank Lowry. Kathleen also had many nieces and nephews and great nieces and nephews that were very good to her and she loved each very much. Family and friends may visit at Coyle Funeral Home, 1770 S. Reynolds Rd., Toledo, Ohio on Thursday October 5, 2017 from 2-8 pm where a Rosary will be recited at 7pm. Funeral services will be held on Friday October 6, 2017 beginning at 10 am. in the mortuary, followed by a funeral mass at St. Joseph Catholic Church in Maumee, OH at 10:30 am. Interment will be in Calvary Cemetery. Kathleen would want us to be certain and thank the loving staff at The Glendale Assisted Living in Toledo, Addison Heights Health and Rehabilitation Center in Maumee and Southern Care Hospice Services. Donations may be made to The Glendale Assisted Living, Addison Heights Health and Rehabilitation Center in Maumee or Southern Care Hospice Services. Please view and sign the guest registry at coylefuneralhome.com

The family of Kathleen Eleanor Carlucci created this Life Tributes page to make it easy to share your memories.

Send flowers to the Carlucci family.