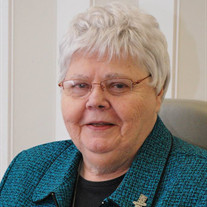 Sister Justine Hill, OSU (Sister Thomas More, OSU) Sister Justine Hill formerly known as Sister Thomas More, died Wednesday, July 19, 2017 at The Ursuline Center 4035 Indian Road, Toledo. She was born in Louisville, Kentucky on March 1, 1933, the daughter of the late John and Nellie Callahan Hill. Sister Justine attended St. Ursula Academy and graduated from Mary Manse College in 1955. She began her teaching career at St. Ursula Academy in 1955 and taught there until 1958 having entered the Ursuline Convent in August of 1957. After completing one year of her novitiate she was assigned to teach the 7th grade at Rosary Cathedral. She then returned to St. Ursula Academy and taught English, Mathematics, and Religion there for four years. In 1964 she was assigned to Central Catholic High School where she taught Journalism and was moderator of the yearbook and newspaper for four years. In 1968 she was accepted to a doctoral program in Administration at the University of Toledo. There she became familiar with many departments of the University. When she was part of the Admissions, the members re-named themselves as “The God Squad” because they felt blessed by her presence among them. Before she completed the doctoral program, she was made the Dean of students at Mary Manse College and then became the Academic Dean until Mary Manse closed in 1975. After Mary Manse closed, Sister Justine stayed on to clear up any loose ends to ensure that the academic files and other pertinent papers were properly placed and preserved. In March of 1976, she was elected the General Superior and remained in that position for two three- year terms. In 1982 she served as Director at Projects preparing both community members and related employees for the building of Ursuline Center and moving from the Collingwood Motherhouse. She also served as a consultant to the superintendant of Catholic Schools. In 1985 she was asked to work in the Finance office of the Community and then became the Treasurer of the Community, serving in that capacity until she was re-elected general superior in 1988 and served in that capacity until 1994. After her term of office was completed, she served as Director of Finance for the Community. Although she never completed her work and dissertation for the doctoral program, she used the leadership skills and knowledge learned in the program, having served in a leadership positions from 1976 until her most recent illness. She was pre-deceased by her parents and a sister, Helen Hill Fowler. She is survived by cousins and Sisters and Associates of the Ursuline Community. Visitation will begin at 3:00 p.m. on Friday, July 21st. t the Ursuline Center followed by a Vigil at 6:30 p.m. A Mass of Christian burial will be held at Ursuline Center on Saturday, July 22, 2017 at 10:00 a.m. with burial at Resurrection Cemetery. Memorials may be made to the Ursuline Convent, 4045 Indian Road, Toledo, OH 43606. Please sign the guest register at CoyleFuneralHome.com Arrangements are by Coyle Funeral Home 1770 S. Reynolds Road.

The family of Justine Hill created this Life Tributes page to make it easy to share your memories.

Send flowers to the Hill family.