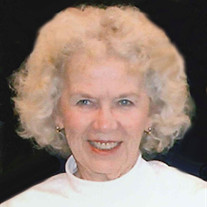 June Ann Whipple, 86, died on February 15, 2019, at her long-time Old Orchard home from complications of dementia. June was born in Pontiac, Michigan in 1932, the eldest daughter of Pearl (Gerow) Larson and Harold Larson. After the family relocated to Berea, Ohio, during World War II, they moved to a farm in Ortonville, Michigan. June graduated from Ortonville High School in 1950. Following high school, June moved to Detroit to attend The Harper Hospital School of Nursing. June worked for many years until her retirement as an RN in orthopedics at Toledo Hospital. June thrived in Detroit, where she met her husband, Edson Austin Whipple, on a blind date. Ed was a University of Michigan undergraduate from Plymouth, Michigan, where they married in 1953. Ed was no doubt attracted by June’s beautiful blue eyes, great smile, curly hair, smarts and spunk. After his service in the Army and a return to Ann Arbor for graduate school, the couple moved to Toledo in 1958 when Ed took a job at The Blade. They had been married almost 65 years when Ed died in 2018. June had many interests. She was always active in pursuing them. June loved music, as she and Ed first got to know one another at jazz clubs in Detroit. She enjoyed piano playing of any stripe and heard most of the great orchestras and many amazing musicians perform in some of the great concert venues (and bars) of the world, with Hill Auditorium, Carnegie Hall, Preservation Hall and The Concertgebouw among her favorites. She thought the Toledo Symphony held its ground with the best of them, the Peristyle being a treasured place for her. June and Ed were often on the move, travelling throughout the United States, Canada and Europe. While June preferred cities, especially New York, and Ed preferred sports and the outdoors, their shared adventures kept them going to new places and doing new things throughout their lives. Their prototype trip would include family and friends together with a sporting event, a concert, a museum, a long walk or hike and being outdoors at a garden or park. June was generally more interested than Ed in good food and drink. She was partial to dessert and bourbon. An avid reader, she was always on the lookout for a bookstore with a good selection of British mystery novels. However far her travels took her, June most loved going up north to the family cabin at Mullett Lake, Michigan. June was often heard to remark “we had a really good day.” It seems like that was most of them. June was never as sports-mad as her immediate family and, unlike them, mostly didn’t care who won or lost. In that regard, she was a positive influence. An exception was the University of Michigan softball team. She admired Coach Carol Hutchins, the softball team’s skill, physical and mental toughness and success. June decidedly cared whether the softball team won and often wished her sister Janet, the athlete of the Larson sisters, could come watch a softball game with her in Ann Arbor. Nevertheless, June could usually be talked into coming along to the many games her family frequented, often with the promise of a meal afterwards. She took up running in her later years and always enjoyed a good walk. June was spry to the end, attending University of Michigan home football, ice hockey, softball, baseball and men’s basketball games the past two years. A long-time member of the First Unitarian Church of Toledo, June was attracted to its members’ shared interests in peace, social justice and respect for all people and religions. She made good friends there over the years. One of her favorite things was a buddha head, a birthday gift from Ed, in the flower garden she tended at home. Pearl and Harold would be proud that June and her three sisters and their families have stuck together, even as age and distance have made it harder. Long Larson goodbyes, that annoy the male members of the family; Sister Week up north, which morphed into Sister Two Weeks and other locales; and family gatherings full of love and laughter will endure. June is survived by her children, Mary Ann Whipple and Edson Austin Whipple, Jr. (Rebecca); her grandsons, Thomas Austin Whipple and Erik Benjamin Whipple; her sisters, Janet Clancy (the late Charles), Mary Macartney (the late Frank) and Karol Winslow (Leroy); her brother in law, Elmer Whipple (Hilma); her nephew and nieces; and Becky’s mother and sister, Margery Waldo and Deborah Waldo. As dementia took over, one of Ed’s many photos of Tom or Erik always brought June joy, even though she didn’t quite remember who they were. The family is thankful for the caregivers from Home Instead and hospice who looked after June with love and patience, allowing her to stay in her home. June would be honored by memorials to the Toledo Symphony Orchestra, First Unitarian Church of Toledo, Hospice of Northwest Ohio or any charity of the donor’s choice. June’s family will greet friends at Coyle Funeral Home on Friday, March 29, 2019, from 4:00 until 8:00 P.M., followed by a memorial service at First Unitarian Church of Toledo, 3205 Glendale Avenue, Toledo, OH 43614, on Saturday, March 30, 2019, at 1:00 P.M. Please leave a condolence message for the family at CoyleFuneralHome.com.

June Ann Whipple, 86, died on February 15, 2019, at her long-time Old Orchard home from complications of dementia. June was born in Pontiac, Michigan in 1932, the eldest daughter of Pearl (Gerow) Larson and Harold Larson. After the family... View Obituary & Service Information

The family of June Ann Whipple created this Life Tributes page to make it easy to share your memories.

Send flowers to the Whipple family.