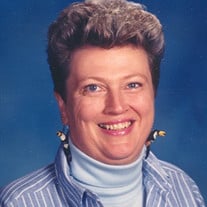 Judith A. McBride Judith A. McBride passed away unexpectedly on Monday December 23, 2019 at her home in Perrysburg, OH. Judy, as she preferred to be called, was 79 years old. Judy was born on January 13, 1940 in Lafayette, Indiana to Charles... View Obituary & Service Information

The family of Judith Ann McBride created this Life Tributes page to make it easy to share your memories.

Send flowers to the McBride family.