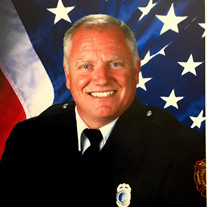 Joseph A. Schwanzl of Rockford, Michigan, (formerly of Toledo, Ohio), age 60, died at home on Monday, September 14th, surrounded by his loving wife, children, grandchildren and family. He was born to Robert and Carolyn Schwanzl, on May 8, 1960 in Toledo, Ohio. Joe was a 1978 graduate of Bowsher High School. He always had a passion for cars and his first formal job was with Charlies Dodge, where he met his future wife, Shari Robinson. They married in 1982 and were blessed with four children and four grandchildren. Joe was an amazing and involved father and very special "Papa Joe" to his grandchildren. He was an active outdoorsman and loved hiking, landscaping and camping. Moving to Michigan and retiring shortly after allowed him to enjoy all those activities; as well as to spend time with great groups of friends at the Honey Creek Inn and the Gristmill. Joe proudly served on the Toledo Fire Department for 25 years at a variety of stations; as well as being on several specialty teams. He retired as a Lieutenant in 2013. Joe is survived by his wife, Shari Schwanzl; his children, Jillian (Todd) Gilsdorf, John Schwanzl, Mark Schwanzl and Emily Schwanzl; and grandchildren, Claire, Ethan, Benjamin and Jonah Gilsdorf. He is also survived by his siblings, Mike (Sue) Schwanzl, Marie (Phil) Mason and Angie (Ed) Schweickert; as well as many nieces and nephews. Joe was preceded in death by his parents and his nephew Andrew Schwanzl. There will be a visitation at Pederson Funeral Home, 127 N. Monroe Street NE, Rockford, MI 49341 on Friday, September 18th from 1:00 pm until 8:00 p.m. There will be an additional visitation at Coyle Funeral Home, 1770 S. Reynolds Rd, Toledo, OH 43614 on Sunday, September 20th from 1:00 p.m. until 8:00 p.m. There will be a Last Alarm Service at 7 p.m. on Sunday at Coyle Funeral Home. A funeral mass will be held at St. Joseph's Catholic Church, 104 W. Broadway, Maumee, OH 43537 at 10:30 a.m. on Monday, September 21st. Burial will be at St. Joseph's Cemetery, Maumee. The family would like to send a special thank you to Dr. Chandana and Emily Meyers of Lemmen-Holton Cancer Pavilion for their exemplary and personal care the last 3 years, as well as Spectrum Health Hospice for their support the last days of Joe's life. Memorial contributions may be made to the Toledo Firefighters Museum, 918 W. Sylvania Ave., Toledo, OH 43612 or Helen DeVos Children's Hospital, Spectrum Health Foundation, 25 Michigan St. NE, Suite 4100, Grand Rapids, MI 49503. Please leave a condolence message at CoyleFuneralHome.com.

Joseph A. Schwanzl of Rockford, Michigan, (formerly of Toledo, Ohio), age 60, died at home on Monday, September 14th, surrounded by his loving wife, children, grandchildren and family. He was born to Robert and Carolyn Schwanzl, on May 8, 1960... View Obituary & Service Information

The family of Joseph A. Schwanzl created this Life Tributes page to make it easy to share your memories.

Joseph A. Schwanzl of Rockford, Michigan, (formerly of Toledo,...

Send flowers to the Schwanzl family.