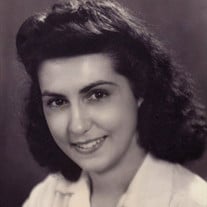 Seibenick Josephine M. Josephine Mildred Seibenick nee Cira was born in Syracuse New York September 5, 1922 and passed away in Toledo, Ohio on April 7, 2017. Millie graduated from Central Catholic High School and attended DeSales College as a voice major where she met and married a handsome football player from Defiance, Ohio, Bernie Seibenick. They made sweet music together producing 10 children, Lynn (Randy Enomoto) Vancouver, Canada; David, Perrysburg, Ohio; Chris (Jim Johnston), Perrysburg, Ohio ; John (Joanne Gall), Toledo, Ohio; Lee , Kettering, Ohio; Dan, Toledo, Ohio; Kurt (Judy), Toledo, Ohio, Mary (Milo Waits), Carlsbad, California; Peter (Joan) West Chester, Ohio; Eric (Phyllis Castro), Stuart, Florida. In addition, Millie is also proud of her 15 grandchildren and 3 great grandchildren. Millie was active in the community at her Church, St. John XXIII in Perrysburg, Ohio and for 17 years as a docent at the Toledo Art Gallery. Preparing for her volunteering at the Art Gallery she was a member of Toastmistress for 17 years. For more than 20 years Millie sang in the Toledo Opera chorus loving the excitement of the music and productions. She volunteered for Hospice of Northwest Ohio and enjoyed the education sessions. She also had a keen interest in Interior decorating and was teased by her children for the number of times she moved furniture to redecorate her house. She always had a great sense of style and good taste Millie was strong in her Catholic faith and she was always with a dog or two around the house. In lieu of flowers, the family is requesting a donation to St. John the XXIII or to a dog rescue agency. A Memorial Service will be held at St. John XXIII on June 1, 2017 beginning at 10 AM. Please view and sign the guest registry at coylefuneralhome.com.

The family of Josephine Mildred Seibenick created this Life Tributes page to make it easy to share your memories.

Send flowers to the Seibenick family.