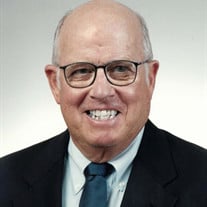 Joe Rutherford passed away on Wednesday, August 11, 2021, at StoryPoint in Waterville, Ohio. He had recently celebrated his 88th birthday. Joe was born on July 31, 1933, the youngest of 10 children born to Albert and Mary Rutherford in East Toledo. He graduated from Central Catholic High School, Class of 1951. He enlisted in the U.S. Marine Corps, attending Boot Camp at USMCRD Parris Island. He served as a Drill Instructor at USMCRD San Diego for part of his three years of active duty, the remainder at Camp Pendleton, and then served an additional 6 years as a reservist in Toledo. He was Honorably Discharged in 1960 as a Staff Sergeant. Joe received his B.S. in Education from the University of Toledo 1959, his M.S. in Education 1964, and his Ed. Specialist/Administration Certificate in 1969. He was twice elected as President of the Alpha Sigma Phi fraternity and was selected for Phi Delta Kappa. Joe met his wife Cece while he was the Lyndon Johnson presidential campaign volunteer coordinator in Lucas County. They were married on November 21, 1964, and would have celebrated their 57th anniversary later this year. They were the proud parents of three children: Joseph, James, and Lynne. His grandchildren lovingly called him “Dziadzia”. After working his way through college at the Babcock Dairy in Toledo, Joe dedicated his life to Education, starting out as a teacher in Lyons-Chesterfield High School in Fulton County, Ohio, then at Libbey High School in Toledo, and as a lecturer at the University of Toledo. He moved into school administration as a principal at Lyons-Chesterfield High School, as the Superintendent at Spencer Sharples Local School District, and worked for six different superintendents as Director of Legislative Services for the Toledo Public Schools. Joe was a visionary; a creative, “out of the box” thinker and leader in the education field. Examples include being a part of the creation of the Toledo School for the Arts and the International Studies Center. He also strongly believed in leading-edge ideas like magnet schools and parental school choice. After he retired from TPS in 1991, he continued to work for the TPS on a contract basis, and then for a variety of employers who retained his services for his legislative knowledge and lobbying skills. In 2000, he was elected to the Governing Board of the Educational Service Center, Lake Erie West and in 2001 was appointed to the Penta Career Center Board of Education. In 2003, he was involved in the development of The Challenger Learning Center of Lucas County. Joe retired from the ESC and Penta Career Center boards in 2018, which capped a 50+ year span of service to Education and to his community. Additionally, Joe served on the following volunteer Boards: Toledo Council of Catholic Young Adults (President), Lucas County Young Democrats (President), Reynolds Corners Rotary Club (President), the United Way Campaign (Education Vice-Chairman for 25 years), Central Catholic High School Board of Education, Toledo Opera Association Executive Board, the Toledo School for the Arts, World Cup of International Wrestling (Vice-Chairman), Ohio Job Training Coordinating Council, the Greater Toledo Aquatic Club (President), the St. Patrick’s of Heatherdowns Athletic Boosters Club (a founding member and President), Hidden Harbor Homeowners Association (President) and the North Central Regional Education Laboratory Board of Directors. Joe was a 50-year active member of St. Patrick’s of Heatherdowns Catholic Church. He was a lifetime member of the Lou Diamond Detachment of the Marine Corps League, and the American Legion, Arthur Daly Post #334. Joe is survived by his wife Cecilia (Kaminski), son Joseph (Marcia), daughter Lynne (Jordahn) Gardner, and daughter-in-law Dorotea, eleven grandchildren (Lauren, Olivia, Joseph William VI, and Ian Rutherford, Rosalia, Joseph Charles and Catherine Rutherford, and J. Patrick, Abigail, Elizabeth and Charlotte Gardner) and brother Charles (Patricia) Rutherford, and many beloved nieces and nephews. He was preceded in death by his parents Albert and Mary (Overberg) Rutherford, eight brothers and sisters, his son James, and grandson, Anthony Ignatius. In lieu of flowers, the Rutherford Family asks that donations be given to the Toledo Community Foundation/Rutherford Family Scholarship Fund for Waite High School, to Central Catholic High School in Toledo, or St. Patrick of Heatherdowns Church. The Rutherford Family thanks Dr. Barry Conlan for taking such good care of Dad for many years. We also recognize and thank the staff at StoryPoint in Waterville, especially Tara, Sam, Tiffany, Rhonda, Zion and the many other dedicated, compassionate, and caring people there. Finally, we thank the good people at Visiting Angels and Ohio Living & Hospice who helped care for Dad in his final days. Friends may visit at the Coyle Funeral Home, 1770 S. Reynolds Rd. on Monday, August 16 from 4:00-7:00 p.m. with a Scripture Service at 6:30. The Memorial Mass will be held at St. Patrick of Heatherdowns Church on Tuesday, August 17 at 11:00 a.m., with a greeting of guests at 10:30. Interment will be private at Resurrection Cemetery. Please leave a condolence message and view Joe's Memorial Video tribute at CoyleFuneralHome.com.

Joe Rutherford passed away on Wednesday, August 11, 2021, at StoryPoint in Waterville, Ohio. He had recently celebrated his 88th birthday. Joe was born on July 31, 1933, the youngest of 10 children born to Albert and Mary Rutherford in East... View Obituary & Service Information

The family of Joseph Rutherford created this Life Tributes page to make it easy to share your memories.

Send flowers to the Rutherford family.